I was wandering around in the mall the other day. I had no interest in shopping, but the temperature here in Arizona was already in the 90s and it was only 10:30 in the morning. Where else could a guy wander without getting heat stroke? The stores were unappealing to this 65 year old. Persons of my demographic are definitely not the target population of the mall entrepreneurs. I came upon a Zumiez store and went in. Immediately I realized, I was in familiar territory, enveloped in the skater’s world of hats, shirts, pants and jewelry, each item with a graffiti influenced graphic design. The young male clerk was alone. He greeted me, and probably out of boredom, began asking me a lot of questions concerning my interest in the skateboarding world and its merchandise. I saw a surprised look on his face, when he discovered that an old guy like me could hold his own when talking about the sport and its history. Before long I told him about our son, Ben, and his untimely death. He apologized profusely for hitting a sensitive nerve, but I had been cruising through life lately, not feeling Ben’s loss too much, so I welcomed the opportunity to feel and remember and told him not to worry. Strangely the store didn’t appear all that different from the ones Katie and I had shopped in all those years ago. Zumiez is originally a Washington store, the state where we lived while Ben was growing up. Throughout the 80s & 90s, for birthdays, Christmases or anytime we needed a present for him, we could always find something at Zumiez.

The clerk and I talked about some of the skateboarding pioneers and I really impressed him with my knowledge. These guys had been Ben’s idols all through his childhood and he loved telling his mom, his Auntie Karen and me all about them in great detail. Even though he was a self professed non-reader, he voraciously read the skateboarding magazines, like Thrasher, from cover to cover.
Tony Hawk, Lance Mountain, Mike McGill, Tommy Guerrero and Rodney Mullen of the “Bones Brigade” sponsored by Powell-Peralta, Stacy Peralta, and Steve Caballero (man could that guy get major air on a half-pipe), all were familiar household names to me. Ben and I watched a video tape of Rodney Mullen doing incredible original tricks with his skateboard on an empty street or sidewalk. Ben was impressed that Rodney was such a creative purest. He didn’t need ramps, stairs, rails or half-pipes, just a board and a flat surface to perform his magic. 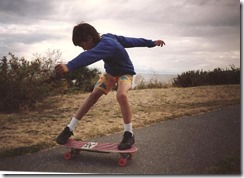 Skateboarding was the first activity that Ben put hours and hours of time into. It took him weeks of frustrating practice to finally master the initial trick that was the essential key to his mobility and all subsequent tricks to follow. I liken it to when I first learned to ride a bike in the 50s and with that one skill, my world was expanded exponentially. And so did Ben’s, when he mastered the Ollie. Being able to make the board leave the ground and then land it confidently, meant that he forever left behind the realm of kids, who when coming upon a curb, had to step off their boards, pick them up and place them on the sidewalk before resuming their ride. Now he was free to travel around town, hopping curbs and set to develop ever more impressive tricks like kick flips, shove its, 180s, 360s and so many other tricks that I could never quite understand or remember. From that time on and for the rest of his life, Ben was kind, patient and empathetic whenever he came upon a kid who was trying to learn the basics of skateboarding and they all loved him for it.

Having the right board was essential. The first one we bought him was a ready made board from Toys ‘R’ Us(a stupid name for a store and the R is supposed to be backwards). He quickly grew out of that one and wanted a custom board with hand picked deck, trucks (the front and rear axle assemblies) and wheels. One year we planned a week long family vacation to California that included buying him a custom board.
In a gnarly little shop on the boardwalk in Hermosa Beach,  he painstakingly chose a Freddy Smith deck from a plethora of super cool decks. Then we stood by and watched as the young salesman meticulously applied the grip tape to the deck and comp 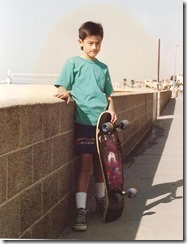 leted the assembly by bolting on the special trucks and wheels Ben had chosen.
Skateboarding was not just a sport, but a sub-culture and this was the identity Ben chose. At a young age he identified with and dressed like a skater dude. It all seemed so innocent at the time. He wore special kinds of shoes, baggy tee shirts, huge pants sagged halfway down his butt, silver necklaces and hats that looked too big and were worn crooked. His friends were nice and polite and came from loving families.
The dark side of this sub-culture emerged as he got older. At age 28 the drugs took him and we’ll never get a chance to know him as a mature adult. He’s frozen in time as an aging skater dude.

I didn’t tell all this to the sales clerk at Zumiez. In fact right in the middle of our conversation about the film “Dogtown and the Z-boys”, he received a call on his cell phone and excused himself. Katie and I watched that documentary shortly after Ben died, probably in an attempt to feel some sort of closeness or understanding or something. It was a great documentary, but it made us feel worse. The call must have been of utmost importance, because the clerk started whispering into the phone and quickly retreated into the back of the shop and didn’t return. I left the store and wandered over to the food court to get some lunch.
Ben loved skateboarding his entire short life and I can’t help but love it too. I like to think of him up there flying, getting some major air. 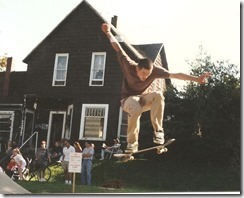 Posted by Michael Yeager at 3:39 PM No comments:

The Hi Wo Company Grocery Store

Last Thursday I hopped on my motorcycle and rode off in search of a blog topic. It was a beautiful southern day, not too hot, sunny with a cool breeze. I remembered stopping at the San Pedro Valley Arts and Historical Society in Benson when Katie and I were exploring new territory after our move from . I noticed some pictures and information about a Chinese family who lived in Benson from the late 1880s until the recent past. This was at a time in our history when there was so much racial prejudice against the "yellow peril" that in 1882 the federal government passed the Chinese Exclusion Act which limited any further immigration of Chinese people and barred those already here from becoming US citizens.


The cowboy era has always interested me, probably because I grew up watching all those western television shows and movies. But frankly I’m getting a little tired of the Earp brothers and their six minutes of fame. There were tens of thousands of Chinese men who came to the in the mid to late 1800s, first to work in the mines and then to build the transcontinental railroad. Most are forever lost to history, unrecognized and unappreciated.


At the historical society, a nice woman named Jeanette helped me find information on the Wo family, who owned and operated the Hi Wo Company Grocery store on from 1896 to 1989. Hi Wo came to the when he was 16. He first lived in San Fransisco and then moved to where he worked in a restaurant. I’m not sure why he left , maybe Doc and those pesky Earps and Clantons were getting under his skin. He moved first to , and then to Benson, where he stayed for the rest of his life. At the age of 39 he opened the Hi Wo Company store. It sold groceries and other goods. Jeanette proudly showed me Hi Wo’s stove and refrigerator that the historical society had acquired.


Hi Wo must have been a courageous man to have established himself and family as respected members of American society at a time when there was so much hatred and prejudice against the Chinese. He married twice and had four daughters and a son. He died in 1931 and two of his daughters continued operating the store. The information online says that the Wo
family descendants still owned the building, but Jeanette told me they have since sold it to a woman named Kay Luzadder. Kay owns the Clip Cut N Polish beauty salon  right next door to the old Hi Wo Company building.  Jeanette said that the building was only a block and a half away from the historical society, so I walked over to have a look.


The two story stucco building was locked and the windows boarded up. I went next door to the Clip Cut N Polish and found Kay giving a manicure to a customer. The beauty salon was quite busy, there must have been six or seven women sitting in there in various stages of their beauty makeovers. All of them seemed very interested in why I had entered the salon. Kay asked if I wanted a haircut. I declined and told her I was interested in looking inside the old Hi Wo store. At first she said I’d have to come back at a time more convenient for her, but as I was about to leave, she told her assistant to finish up on the woman’s nails and said to me, “Come on, I’ll give you the one minute tour.”
I followed her next door. She unlocked the building and we went inside. It looked like an antique shop that needed to be organized. Stuff was piled everywhere. Kay showed me binder after binder filled with letters, post cards and ledgers from the Wo family. There was a diary of one of the daughters and a lot of family pictures. She said all this stuff was left in the building when she bought it and that she spent hours and hours painstakingly organizing it. She told me she bought the building because she needed the parking space for her beauty salon. The Hi Wo building is on the Arizona Historic Register and so if  Kay wanted the parking space around it, she needed to buy the building, but not tear it down. My minute tour was up all too soon and I asked her if I could come back and nose around some time in the future. She said I’d have to make an appointment and that she would need to supervise me. She has a goldmine of history in that building and I decided I wanted to return at a future time.


I thanked her and left to search for evidence of Chinese gravesites in the area. Except for Hi Wo, his second wife Emeteria and Hi Wo’s son Joe M. Wo who are buried in the Benson City Cemetary, I’m not having much luck. But that’s another story, another blog.
Posted by Michael Yeager at 2:04 PM 3 comments: