When the railroad expanded across the country from East to West in the late 1800s, Fred Harvey opened restaurants and hotels all along the Acheson, Topeka and Santa Fe train routes. They were classy establishments with fine linen, china, silverware, crystal, gourmet food and impeccable service. Fred Harvey died in 1901, but his hospitality business was carried on by his family.


Harvey employed thousands of young women from all parts of the country, and many from Europe, to serve in his establishments. They were called “Harvey Girls.” In the development of our nation, Fred Harvey is credited with bringing lots of eligible women out West, where men drastically out-numbered women. Working in a Harvey hotel or restaurant was a great opportunity for a young woman at a time when women had few options for employment, travel and adventure. The western cowboys, shop keepers, buffalo hunters, gamblers, ranchers, farmers, miners and even some bandits were enchanted by these well-trained, sophisticated women. 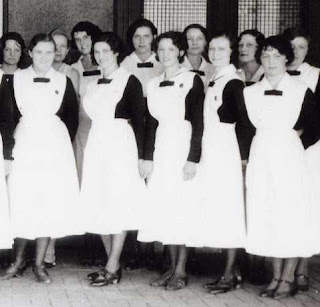 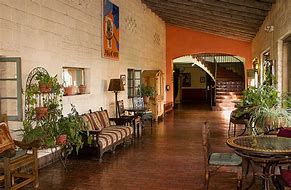 We booked a room in the historic hotel. The inside of the hotel was as beautiful as the exterior. They took great care in keeping things in period. Many famous people stayed there over the years, Einstein, Truman, Jane Russell, Spencer Trac

y, Sinatra, Roosevelt and Errol Flynn to name a few. Each room had a picture and biography of the celebrity who slept there. 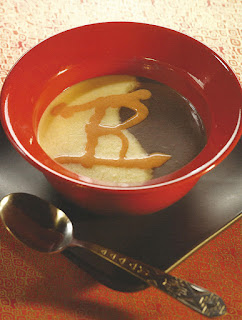 At the restaurant we ate dishes from the original Harvey House menu like their corn and black bean soup. The waitress instructed me as to how to eat it. “First take a bite of the corn side, then the bean side, and after that you can eat them together.”  I followed her guidance and it was delicious.

On the morning we left Winslow, I thought it would be cool to get my picture taken “standing on the corner”, like in the Eagles song, “Take it Easy”. I didn’t have to look

very hard to find a corner to stand on, because there is a sign on a corner in the middle of town that reads “Standin' on the Corner” and there was a bevy of couples, all in their sixties and beyond, taking each other’s pictures standing next to the sign.The town of Winslow has created a major tourist attraction out of the first hit single by the Eagles. There is even an annual "Standing on the Corner" festival. 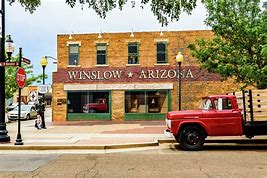 Originally the song was written, but not completed, by Jackson Browne for his first album. Glen Frey heard it, liked it and encouraged Jackson to finish it. Glen wanted to record the song with his band, but months went by without progress. Finally, Glen asked Jackson if he could finish the song for him. Jackson agreed and the rest is rock & roll history. It is the first cut on the Eagles first album and was their first hit single in May 1972. Jackson recorded it also as his first cut on his second album “For Everyman”. 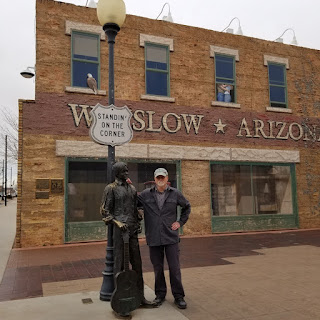 The morning was cold and overcast and I had to wait my turn to get my picture taken. Next to the sign is a statue of a young man with a guitar, his shoulder worn smooth and shiny from all the tourists putting their arms around him. He does not resemble Jackson Browne, but another statue not far away, of a long-haired hippy dude, does sort of look like Glen Frey. Murals on the building behind depict the reflection in a hotel window of a young woman driving by in a flatbed Ford and in an upstairs window, a young man and woman are in an embrace. There is even a real flatbed Ford pick-up strategically parked on the street in front. They went all out to replicate the second verse of this early seventies’ song.


The woman running the gift shop across the street told me that in the warmer weather there are people from all over the country and around the world taking pictures and buying mementoes. She said it’s a big deal for tourism and the Winslow economy. One line out of a song, who’d of thought, but then again, baby boomers like myself are nuts about our music.
Katie and I poked around the gift shop for a while and then continued on our journey,
Posted by Michael Yeager at 12:17 PM 2 comments: