The Night Funnyboy Got His Name 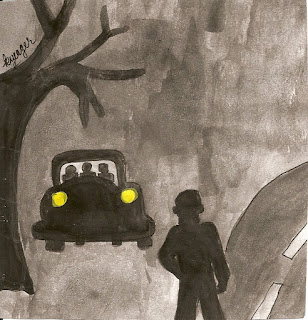 In 1964 between my junior and senior years in high school, I transferred from a small private school to a public school that was over 10 times bigger. Most of the students at the private school were from out-of-state and boarded there. I was a day student or “day-pup” and not very popular. My childhood friend, Paul, had a lot of friends at the public school and when I switched schools many of his friends became mine. Suddenly I felt popular, had a lot of freedom and couldn’t have been happier.

I was happy not having to wear a coat and tie to school anymore. My new group of friends had their own dress code. It consisted of Levis jeans, sport shirts, preferably Gant, and Bass Weejun penny loafers. We wore our hair long on top, without hair grease and brushed across our foreheads. Look at any early Beach Boys album and that’s pretty much how we looked. We weren’t jocks and we weren’t greasers, I guess in today’s language, we were preppies.
Cruising around in cars is what we did on summer nights. We were all over 16, most of us had access to one of our parents’ cars and a few had cars of their own. One warm Missouri summer night, four of us went cruising along the Missouri river. We had already driven the hamburger circuit and not much was going on. To escape the humid night, we sought relief on the dark, cool river road. With the windows cranked down and the radio turned up, we talked, laughed and sang along.
My friend, Glen, a big likeable guy from my previous school, came along. Glen did not neatly fit into any of the clique categories. He was a year older and wore his hair military short. He said it was cooler in the summer, which I suppose it was. He owned several vehicles and spent much of his time tinkering with them. One was a maroon colored '56 Ford. He had jacked up the rear end, put on oversized tires and did something important to the gear ratio, which I could never remember, but it made the car very fast. It had a 3-speed transmission on the floor and when he fired it up, it pulsated like an out of balance washing machine. If that wasn’t enough, he also owned 3 motorcycles--a 650cc BSA lightening, a single cylinder Triumph 500 (a thumper) and a 250 Honda Scrambler. I don’t know why he went cruising with us that night, but he did and he seemed to be enjoying himself.
I was driving my parents Chevelle Malibu that night. I noticed, in the rear view mirror, headlights coming up fast behind us. A car drew closer and closer until finally it was riding on our tail. The high beams began flashing annoyingly, so I slowed down to allow the car to pass, but instead of passing, it slowed and rode along side of us. The car was a 4-door Dodge Polara. I could see five guys, three in back and two in front. The guy riding shotgun yelled something at us and then the big Dodge took off. As the taillights grew dim up ahead, we heard laughter trailing behind. We couldn’t figure out what the guy had yelled, but assumed it was a derogatory remark. Glen remained quiet during our agitated discussion.
We soon returned to singing and talking, but as we rounded a bend, there the Dodge was stopped in the middle of the road. I had to slam on the brakes to keep from smashing into the backend. It sped away and again we heard laughter. Another agitated discussion sprung up. Glen had hit his head on the back of my seat and mumbled, “Son of a bitch”. I drove on cautiously. This annoying trick wasn’t going to happen twice. We spotted the Dodge up ahead pulled over to the side of the road. I remember thinking, “Oh shit, there are 5 of them and only 4 of us. As we debated whether or not to pull over, Glen interjected, “Go ahead, pull over.”
Before we had time to formulate a plan, Glen said, “Let me out,“ and then, “You guys wait here.” So we did. Through my car's rear window, we watched as Glen walked straight over to the driver’s side of the Dodge and slammed his hand down on the hood and to the driver said, “OK funny-boy, out of the car!” He stood there waiting for a response. The three of us were craning our necks, taking in the whole scene. But nothing happened, so Glen said in a softer tone, “Come on, which one of you clowns wants to dance?” We fully expected the doors to fly open, our cue to get out as well, but their doors remained closed. Finally we saw the driver’s window roll up followed by the other three windows, then we heard the roar of the engine and the sound of tires spinning in loose gravel. The Dodge sped off leaving Glen standing alone in the dark still night.
The moon was up, and through the trees its soft light danced on the river. We watched as Glen ambled back to the Chevelle. He may as well have been James Dean or Marlon Brando in his blue jeans, chalk white tee shirt and black leather motorcycle jacket. He had a funny way of walking with a slight bounce and his right shoulder jacked up. He climbed back into the car. “I don’t think they’ll bother us anymore.”
On the way home we recounted the incident, especially the part where Glen called the guy "funny-boy". That was the first and last time Glen ever went cruising with us, but from then on we referred to him as Funny-boy.
Posted by Michael Yeager at 10:35 AM