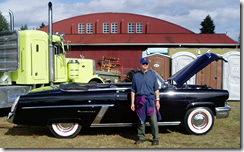 Here I am alongside a  Mercury convertible. It was at a car show that my friend Jim and I went to in the Seattle area. When we go to these shows, we like to pick out our favorite car of the show and this was mine, a 1952 Mercury Monterey convertible.  I recently read that Ford was phasing out its Mercury brand by the end of the year. GM had already announced stopping production of Pontiac. I don’t know what I expect, but these historic car models are not going to be around anymore so it should be a bigger deal than it is. I’m certain there were plenty of articles in newspapers and magazines and announcements on the news, but I don’t remember seeing very much. A few years went by before I realized Chrysler no longer made Plymouths. Production stopped in 2001. And GM stopped making Oldsmobile in 2004.
I have to admit I turned my back on most American cars sometime in the 1970s. They just weren’t built very well during that decade. If you don’t believe me, watch any episode of The Rockford Files which ran in the mid ‘70s. That was the era of the car chase and James Garner, an experienced car racer, made sure there was one in almost every episode.  His car was a Firebird, which he puts through its paces. It appears to handle the rough treatment pretty well, but the full-size ‘70s cars that are chasing after him are squeaking, floating and bouncing all over the road; you expect to see parts fly off around every corner. And in the background are plenty of examples of the crappy small cars that were built at that time like Pintos, Vegas and Gremlins.
I grew up in the ‘50s. Now that was a good decade for American cars. Our first family car that I  remember was a 1952 Pontiac. It was cream-colored with a dark blue top. Shading the front windshield was an external visor. It had a cool chrome hood ornament of an Indian warrior. After a few years, my parents traded it in for a blue two tone 1955 Mercury. I had my first major rock & roll experience in the back seat of that car and it had nothing to do with sex. I was only 8 years old and we were returning home from a family vacation in Wisconsin.  That was when I first heard Elvis on the radio.
As we cruised down the two lane highways in our Mercury, whenever an Oldsmobile passed by my Dad would say, “Now there’s a good highway car.” I don’t know why he never bought one. My friend Paul’s parents had the same exact Mercury except it was red. He and I first met around this time and we both thought that fact was extremely significant. My parents traded the Mercury in 1959 for a successive string of Chevrolets. Paul’s parents stuck with Mercury, trading the ‘55 in for two 1960 models. One was a white Monterey convertible, a behemoth of a car, the other a black Comet.
In 1964 Paul’s parents switched over to Pontiacs,  a GTO and Firebird. He was the envy of many a guy driving around in the  GTO which had a 389 cubic inch engine and 3 two barrel carburetors. The two of us spent many weekend days cleaning our cars together in his front yard. Today you would call what we did detailing. The GTO had a white interior and Paul had to use a small brush and a lot of elbow grease to keep it up.
The first Plymouth I remember belonged to my mom’s cousin, Marie. It was a 1947 and had a semi-automatic transmission. Marie explained to me how the semi- automatic worked, but to this day I’m still confused about it. She told me she would give me the car some day. I of course have remembered that conversation all my life, but she had no recollection of it. One day when visiting my grandmother in south St. Louis, Marie was there visiting with her brand new Nash Rambler. Without a word, my Plymouth was gone forever.
I could go on reminiscing about the various Mercurys, Pontiacs, Plymouths and Oldsmobiles I’ve known over the years, but even fewer people would read this blog than already do. If you like cars, I’m sure you have plenty of your own memories, but just one more quick one. Funnyboy’s parents owned a 1962 Pontiac Grand Prix when he and I were in high school together. They used to let him drive it to school every now and then and he’d take me with him. That was a sweet ride.
Posted by Michael Yeager at 1:34 PM