In Search of “The Thing?”

During spring break, my step son and his family came down from Seattle to visit us. Fleeing the cold, damp weather of the Northwest, they reveled in the sun. Our seven-year- old grandson happily wandered up and down the sidewalk outside our condo, singing to himself and occasionally kicking a rock. The whole family went to the pool everyday, fitting it around our various trips and activities. 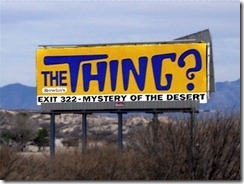 We went hiking in the Chiricahua National Monument, a park in one of the most beautiful and unusual mountain ranges in southern Arizona. On the drive over to the eastern side of the state on Interstate 10, somewhere between Benson and Willcox, we began seeing signs that posed the question, “The Thing, What is it?”. We could find out the answer, we were instructed, by getting off at Exit 322. We had no plans of doing this, because we all knew these signs were a come-on gimmick for some cheesey souvenir shop and that “The Thing?” more than likely was a disappointing artifact that served as a hook to draw people in to shop and eat. As we flew past Exit 322, I noticed a group of buildings including a service station and a Dairy Queen. The main building sported a sign in giant letters, “THE THING?”.
Once in the Chiricahuas we hiked the Echo Canyon Loop on a well maintained path, a total of about 3 miles. It led us through amazing rock formations called hoodoos,which appeared to be stacked by a kindergarten class of giants. The grandkids had fun identifying various animals in the rock shapes. During the hike, my eleven-year-old grandson and I began wondering about “The Thing?”. He thought it might be just the name of the souvenir shop, but I felt certain there was an unusual artifact inside that they were calling “The Thing?”. We talked about the possibility of a two-headed animal, or maybe a mummified creature from the past. The more we talked, the more we knew we had to stop on the way home to satisfy our curiosity. We were traveling in two cars, so after the long day of hiking and driving, it was sort of a big deal to have to stop. I suggested that if “The Thing” was really lame, at least we could get an ice cream at the Dairy Queen next door.
I thought about all those times back in the’50s on family vacations, when on a whim, my Dad would take a detour to see a giant ball of twine or a vortex where things rolled uphill or a giant statue of Paul Bunyan and his blue ox Babe. When my two step sons were young and then later with our son, Ben, we used to love to visit Ye Olde Curiosity Shop down on the wharf in Seattle. It was and still is a bazaar museum with shrunken heads, mummified creatures and fleas dressed in clothes that you view through a magnifying glass. Right next door is an Ivar’s Fish and Chips restaurant . We ate our clam strips and chips while sitting under heat lamps, watching ferries sail in from the Islands on Puget Sound. Wanting my grandchildren to have memories like these, I pushed to stop and check out “The Thing?”.
The gift shop was neat, clean and orderly, and even though the merchandise was mostly a bunch of cheap, fake looking tourist stuff, all members of my family seemed to find something interesting to look at. The seven-year-old bought a bag of polished rocks, enjoying picking out each stone with great care and the older grandson bought a small canteen in a fake leather pouch with a picture of an Indian in full head dress. He happily filled the canteen with water, slung the strap over his shoulder and carried it around on other adventures throughout the week. 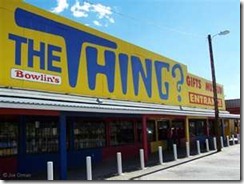 The door to “The Thing?” was in the back of the shop. The admission was $1.00 for adults and $.75 for children. We paid the lady at the counter who told us “The Thing?” was in the third building, “Just follow the big yellow foot prints.” The first building contained a variety of extremely dusty artifacts from the past, including a few cars and tractors in ill repair, some buggies and a covered wagon. One of the cars was a 1937 Rolls Royce with a sign saying Adolf Hitler MAY have previously owned it. I had my doubts. Several mannequins were inside the car and sure enough, there in the back seat with his signature tiny mustache,  Adolph Hitler sat slumped against the window. Further along was a section of cages filled with wooden dummies in various positions of agony brought on by ancient torture devices. I didn’t get a close look at this exhibit because our daughter-in-law made sure we all passed through this section quickly.
In the second building on either side of the walkway, were smaller antique artifacts behind glass. The old rifles from the 17th and 18th century were mildly interesting. One display sign announced an old and modern telephone. The old telephone was one of those big wooden boxes with the mouth piece sticking out front, a crank handle on the side and the ear piece hanging on a hook on the other side, the kind the Waltons used on TV. The “modern phone” was a black rotary dial phone that looked like it was from the early fifties. To my grandsons, this was an exhibit of two old phones. I had to ask myself, how much time and trouble would it have taken someone to remove the rotary phone and chuck in a used cell phone?
In the third building was a glass topped casket containing a dirty, fake looking mummy. There were other old dirty artifacts in this building and after a few moments of confusion, we assumed the mummy must be “The Thing?”, but we weren’t sure. When we re-entered the gift shop, I asked the woman at the counter if the mummy was “The Thing?”. She and a few others shushed me, I guess my voice was too loud and god forbid if the big secret got out. She softly replied, “yes, the mummy was it”.
There are huge gross signs all along the highway asking the traveler to ponder “The Thing, What is it?” so I had to ask her, “After all the hype, why isn’t there a sign that identifies ‘The Thing?’.” She answered in a matter of fact way, “ Someone stole it and they haven’t been able to find it yet.” I had a number of comments and acute observations to share with this woman, but my wife, Katie, nudged me, which I took to mean, “Leave it alone.”
With the exception of the person who stole the sign, it is obvious to all weary and curious travelers that the museum hadn’t been touched in decades. I researched the origins of “The Thing?” and found out that it was originally owned by Thomas Brinkley Pierce, a Phoenix lawyer. In an NPR piece about it, Rene Gutel interviews a distant relative of Homer Tate, who was also from Phoenix and made gaffes(weird creatures and artifacts) for circus side shows. It is suggested in the interview that Homer was the original creator of “The Thing?”. Pierce first displayed it as a roadside attraction on highway 91 between Barstow and Bakersfield. After he died in 1969, it was purchased by Charles Bowlin, who owned a string of travel centers in New Mexico and Arizona. Bowlin Inc. has been a family business since Claude Bowlin began trading with the Indians of New Mexico in 1912. Charles died in 1972 and the Bowlin Travel Centers are now run by his son Michael L. Bowlin. It says on the web site:
“Our company shall always strive to maintain the pride and tradition started many years ago - carrying first-rate merchandise and offering first-rate service to the traveling public. Our mission statement says it all, ‘Bowlin Travel Centers shall continue to grow and serve our customers in our long standing tradition of honesty, integrity, and hospitality by providing high quality products and services at competitive prices, while providing financial stability and a reasonable return on equity for our stockholders, and compensation in excess of market along with a satisfying work environment for our employees’.”
So here is a message to Mr. Bowlin, who undoubtedly reads my blog: It sounds like your company is growing and making lots of money for you and your stockholders by selling your “first-rate” and “high quality” merchandise. But when you say you take pride in your travel centers, perhaps you weren’t thinking about “The Thing?" museum on Highway 10 between Benson and Willcox.  I think you need to come over and take a look. When you come, be sure to bring a dust cloth and a spare cell phone.  And while you’re here you might want to push Hitler up out of his slump. And oh yeah, bring along a piece of cardboard and a magic marker, it seems someone stole one of your small but important signs.
Posted by Michael Yeager at 2:59 PM