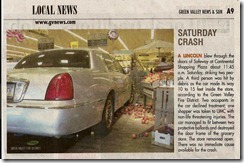 inental sitting in the produce aisle of our local Safeway. Somebody put the gear shift lever on D instead of R and stepped on the gas. A few people had minor injuries, but no one was seriously hurt. This is not an uncommon occurrence here in Green Valley. Not long ago a car leapt over the parking curb and destroyed the Red Box video machine in front of Walgreens--no first run movies for a few weeks.
Last month I got a ticket in Tucson for running a red light on my motorcycle. I had no idea I had broken the law until a few days later when I received pictures of myself in the mail. One of the many cameras planted around the city had captured me on video. There I was out in the middle of the intersection turning left with the traffic light above my head shining bright red. 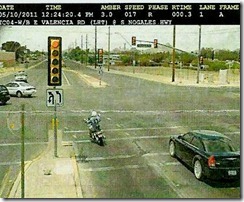 Email ThisBlogThis!Share to TwitterShare to FacebookShare to Pinterest
Labels: Life in the Southwest, Retirement