The "HomeStay" in Hoi Anh 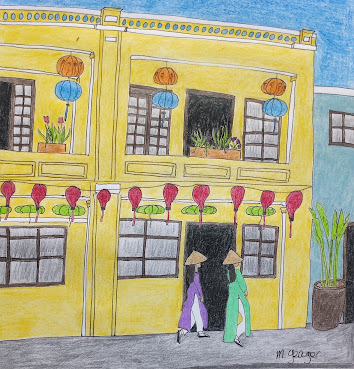 The local bus from Danang south to Hoi Anh took about an hour. Bus drivers in Vietnam have assistants who take care of the passengers, help them on and off the bus and load and unload luggage and packages. On the sleeper buses, the assistants were often pushy and rude, but the assistant on this local bus was a friendly older man who treated the passengers with respect and performed his duties earnestly. 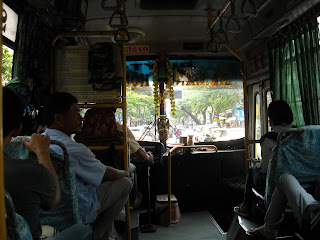 The bus became overcrowded quickly. Katie and I had seats, but others had to stand in the aisle. A woman climbed onto the bus carrying a large basket filled with her products to sell. The assistant helped her on, seating her on a ledge next to the driver. When a seat became available, he made sure she got it, leaving her basket up front under the watchful eye of the bus driver. 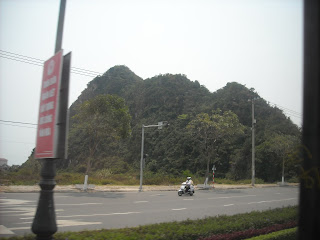 We passed by Marble Mountains, a popular tourist site. There are five mountains, each one named after one of the five elements. The area is famous for its stone sculptures and carvings. Each mountain has a cave entrance and many tunnels. During the war there was a Marine Helicopter facility near the mountains. Also, according to William Broyles book “Brothers in Arms”, there was a Viet Cong hospital hidden in the area at the same time. 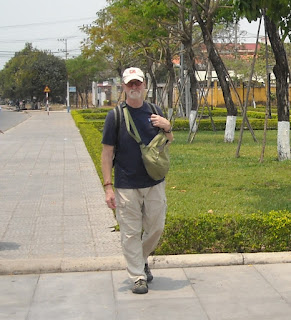 In Hoi Anh we all got off in an open lot, the end of the line. We were approached by men wanting to take us to our hotel on the backs of motorbikes. The hotel was several miles away at the other end of town and across a bridge, on Cam Nam Island. Katie and I each had a back pack and a purse, a “manly bag” in my case. It didn’t seem wise to hop on the back of these small scooters and try to hang on to our baggage. And besides, if I’m on a motorcycle, I want to be the guy driving, it’s a trust issue.  We declined their offers and walked. 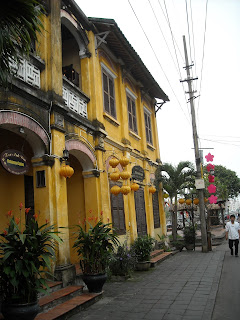 It was a long hot walk. We stopped for lunch and to cool off. Hoi Anh is a beautiful old town. The buildings are rustic and colorful. Right before the bridge going over to Cam Nam Island, we passed through a large open produce and fish “wet” market, bustling with people. 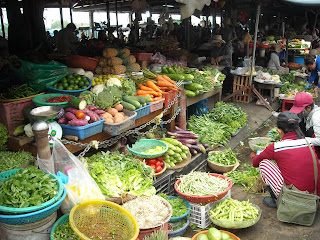 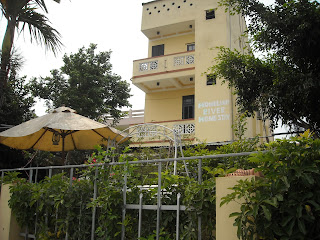 Our hotel was called Homeland River Home Stay and was not really a hotel. The Home Stay program is worldwide and allows students or tourists to rent rooms in a family’s home with the idea of getting to know the people more intimately and immersing in their culture.  Our Home Stay was three stories tall with many rooms.  The bottom of the building was the lobby and open to the street. The family’s living quarters were behind the lobby with the kitchen in the back. 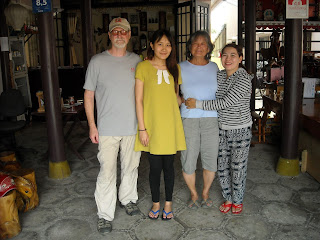 The family who owned and ran the Home Stay consisted of a husband, wife, son, daughter-in-law and two grandmas.  We stayed there for four nights and only saw the husband a handful of times. Thuy (pronounced Twee) ran the place with the help of her son and his wife, also named Thuy, who was pregnant. Not to confuse the two women, when Katie and I talked to each other about them, we referred to the mother as “Thuy One” and the daughter-in-law as “Thuy Two”. We couldn’t help but wonder if “Thuy Twee” was in the hopper. 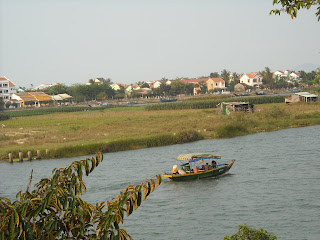 The back of the hotel faced the river. A path ran along the river to a bridge and the main part of town. It was about a twenty minute walk. The open air dining area in back of the Home Stay overlooked the river. Thuy One was an excellent cook. Her fried spring rolls were delicious, especially with a glass of Tiger beer. This became our appetizer of choice. I especially liked breakfast, Vietnamese coffee, eggs and/or fried rice and a crusty baguette with butter and jam. In the mornings we watched fishermen paddle by on their boats, and in an open field on the opposite side, locals tended a commune garden and cows grazed. One of the Thuys checked on us periodically and asked if we needed anything more. Any request we made was met with “I can do for you”. 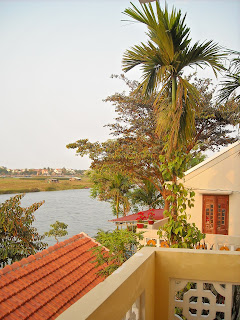 Our first day, we met a couple from Victoria BC. This was their second time at the Home Stay and they had become quite close to the family. They were leaving for home the next morning, after traveling extensively for six months. They encouraged us to take over their room which had a balcony overlooking the river, since our room didn’t have a view or balcony. Thuy didn’t have a problem with the plan, so we moved in the next day. For the next three mornings and evenings, we sat out on the balcony watching the river flow by. 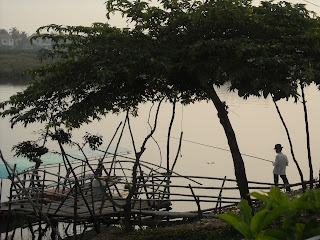 Living at the Home Stay and interacting with this sweet, beautiful family, I frequently thought of a comment Anthony Bourdain uses on his show, “It doesn’t get any better than this”.