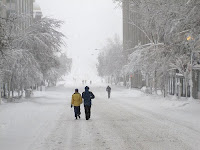 They're having big snow storms in the midwest and on the east coast. Storms blow through Green Valley as rain storms. They don't last more than a day of two. It could rain hard all day, but then hours later there's barely a trace of water. The desert just sucks it up like there's a big underground vacuum cleaner (a worry which might be a later blog topic). Most people here are pretty smug about being out of the harsh weather up north. I feel a slight twinge of longing for the snow. I'm sure it goes back to my childhood in Missouri. As a kid, big snows meant no school. But I don't think the longing is only related to that. I remember the stillness in the early morning light, a light like no other, soft yet bright. And a quiet that stretched out over the land, not unlike the quiet experienced in the desert. It was momentary peace on earth. This is the 3rd day the government is shut down because of the snow in Washington DC. I hope our government officials are taking some time to tune in to nature's blanket of peace.
Posted by Michael Yeager at 12:33 PM