We live in a condominium complex. These small “villas” are one story four-plexes and there are hundreds of them. When we were looking at them last July as a possible place to retire, I noticed that in the center and above the middle window of each four-plex was a small altar. On most of the altars were single statues. The most popular of these by far was St. Francis. There were also statues of the Virgin Mary, Jesus and some male Saints whose identities I have yet to figure out.
In 2002 Katie and I traveled to Italy and France for 2 weeks and one of our stops was Assisi, where St. Francis lived and died. It was in late March and our experience in this ancient town was magical. It hangs on the side of a mountain overlooking the Umbrian valley. We found lodging in a who knows how many year old hotel made of stone blocks. As we walked the streets, we saw evidence of the Greeks, the Romans and thousands of years of Italian history. There were huge ornate churches everywhere. The day was sunny and warm and the sky dark blue with clouds above and suspended across the valley below. 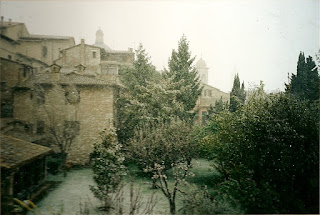 After returning to our hotel room, a storm blew in and it started to snow. We sat and watched the landscape transform.Within minutes the big wet flakes covered the tables and chairs of the hotel courtyard and the orchards turned white. For a brief period we felt transformed along with our surroundings. Surely St. Francis had a hand in this.
His tomb lies in a grotto under a big church built on top of a smaller one which was built two years after his death in 1228. We spent some time silently sitting in seats facing the large casket containing his remains. You can walk all the way around the casket and in the surrounding walls are buried St. Francis’s beloved monk friends. We were told that since his death, there has been an unending stream of pilgrims to this place. We learned a little about his life--his dedication to living simply, his vow of poverty and his love of animals and the environment. The experience was one of the highlights of our trip and even though we are not Catholics, we both felt a special closeness to this simple monk who lived what he believed.
So walking around the condo complex looking at the apartments for sale with our realtor, I was hoping we would find one with a statue of St. Francis above it. When we finally agreed on the one that satisfied all of our requirements, I expectantly looked up at the alter on the outside of the building. But there was no St. Francis to watch over us or for that matter there was no saintly figure at all. What was perched on the altar above our new home was a statue of a squirrel eating a nut. My sister often has squirrels above her home too. Every year they get into her gutter making a big mess and a lot of noise. They clamber all over her roof and she has to call the pest control people to get rid of them. Some of the statues of St. Francis I’ve seen depict him with animals on or around him. Mostly they are birds, but I may have seen a rodent or two. So Katie and I decided to dub our statue “The Holy Squirrel” and assume it is dutifully doing the work of St. Francis and watching over our building. The little critter does however seem awfully preoccupied with that nut. 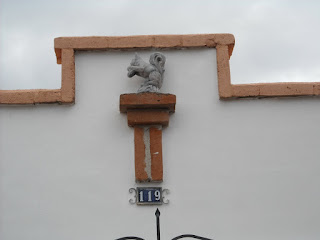