The Poets of a Generaton 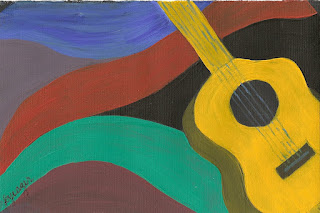 There must be a huge number of us baby boomers that have guitars stashed somewhere in our homes. Some of these guitars get taken out more than others. How many of us dreamed of hitting the road with our guitars slung over our backs, telling the stories of our lives through song.
Singer songwriters were very rare before the 1960s. You had Woody Guthrie, Pete Seeger and Hank Williams, but for the majority of performers there were the singers and then there were the song writers.
The singer songwriter tradition goes back a long way in Europe, but in America it didn’t take off until the '60s. The popular music of the '30s and '40s was big band music, which borrowed its rhythms and inflections from the earlier "race music". In the '50s the focus shifted, the singers became more prominent and the bands faded into an accompaniment role, thanks in large part to the first singing super star Frank Sinatra. Song writers cranked out songs for a multitude of popular singers like Patti Page, Rosemary Clooney, Perry Como, Doris Day and Nat King Cole. When the boomers came on the scene, we rejected this nice sweet music and found our collective soul in black rhythm and blues. That fused with country music and gave us the earliest true rock 'n' roll of Chuck Berry, Little Richard, Jerry Lee Lewis, Elvis, the Everly Brothers, Johnny Cash, Carl Perkins and Buddy Holly.
When “the music died” in 1959, with the exception of Motown, it was replaced by a bunch of white singers like Fabian, Connie Francis, Frankie Avalon, numerous Bobbys (Rydell, Vinton, Vee), Jimmy Clanton, Leslie Gore and Johnny Tillotson. We had again returned to the sweet unimaginative music of the early '50s, except now it had a back beat. The Everly Brothers and Ricky Nelson were among the few who stayed true to the earlier rockabilly tradition.
Folk music was also popular in the '50s, especially on college campuses. There were a ton of folk groups: The Four Freshman, The Brothers Four, the Limelighters, The Hi-Lo’s, the Four Preps, The New Christy Minstrels, and the most popular of all, The Kingston Trio. These groups influenced the harmonies of later rock 'n' roll groups, especially the Beach Boys. Some of these folk groups sang songs written by Woody Guthrie, Pete Seeger, The Weavers and others out of the civil rights/pro-worker movements. The most prominent was Joan Baez the Queen of activist folk singers. She bridged the gap between the earlier folkies and the '60s folk movement. Then along came Bob Dylan in the early '60s and “the rest is history”. Most of the folk music was still in the tradition of early English folk songs. Dylan drew on the depression era songs, black blues singers and the poetry of the Beatniks. Few of us boomers listened to Dylan’s music directly in those early years, but we became familiar with his music through others like the Byrds, Judy Collins and Peter Paul and Mary. There were other folk singers, some predating and some contemporaries of Dylan like Phil Ochs, Eric Anderson, Tom Paxton, Fred Neil, Tim Hardin and Paul Simon, who were also part of this change. These singer songwriters filled a gap replacing traditional folk songs with honest, authentic music drawn from their own lives. They were not your squeaky clean folksingers of the Down by The Dairy O, Tom Dooley tradition. They wrote their own material and didn’t wear matching shirts. The Folk tradition took off in the mid-'60s, fusing with Rock‘n’Roll and country.
The singer songwriters of our generation were our poets and our voice. Artists like Joni Mitchell, Neil Young, James Taylor, Crosby Stills and Nash, Leonard Cohen, Jackson Browne, Carol King and many more expressed the culture and the times through their songs. So let’s dust off those guitars and keep the movement alive. Peace.
Posted by Michael Yeager at 3:28 PM