Friday was our son Ben's 31st birthday. It will be 3 years this May since he died. Katie and I drove up to Prescott to scatter a small amount of his ashes we sav

ed for Arizona. We had several places in mind to scatter the ashes. but couldn't decide. Then it became clear, for the place was right before our eyes. On Katie's dresser is a picture of Ben standing looking out over a serene meadow and lake with trees. We found this picture in his drug and alcohol treatment workbook after he died. It was an assignment: show a place that represented peace for him.
It took us a while to figure out where the picture was taken. It was in Prescott, Az. overlooking the golf course by the condo we used to own. The exact spot where I practiced Tai Chi during the year we lived there. I had taken the picture. Ben was visiting from Washington and he and I rode out to the condo on my motorcycle. We had recently bought it, but hadn't mov 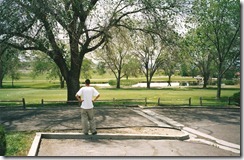 ed in yet. I wanted him to see it before he went home.
I like to think pictures capture a hint of the essence of a person. There is one picture of Ben that was never taken, but is imprinted deep in my brain. It was the last time I saw him. Katie and I were in Seattle. Ben was working at Murphy's Pub and Grill as a cook. He was doing well and looking really good. We went over to Murphy's to eat lunch. He wanted us to experience where he worked and cook our lunch before we headed for home. It was simple bar and grill fare. I ordered a fish sandwich and Katie ordered a dinner salad. Ben served it to us himself. It was carefully prepared and beautifully presented. Katie and I agreed it was a delicious meal and I felt proud of him for being such a steady and dedicated worker. Throughout the lunch he came out from the kitchen to sit and visit with us for a few minutes. After the meal he walked us outside and stood on the corner with us as we waited for the traffic signal to change. It was May, but Seattle was still damp and cold. We allowed the crosswalk sign to change several times before saying goodbye. It felt good to linger together there for a while. Finally, anxious to get home, I started to cross the street when the light changed again. I glanced back at him standing there in his cook’s apron by his mom who was reluctant to leave. I waved goodbye and smiled. He waved and smiled back. That is the picture seared in my brain.
One of the hardest things we've ever had to do in life was clean out his apartment after his death. We had to go through everything and make a decision about each thing’s disposition. Typical of Ben's life, spontaneously a whole bunch of his friends showed up to help. We urged them to take many of his things and some of it was put into boxes with the decision process put off until later. Being surrounded by his young friends felt right. We all hugged and cried in Ben's place, surrounded by his stuff.
He had only two photos on display in his room. Both were pictures of his paternal grandparents. He was extremely close to my mom who died in 1993. I don't think he ever really got over her death. He knew my dad for just the first years of his life, but over time he heard numerous stories about him. Carefully framed and in the most prominent place of the apartment, on top of his television, was a picture from when he was about 15 months old. He is holding hands with his grandparents on the beach. He is happy and safe and the three of them are walking away. 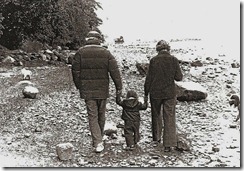 Happy Birthday Ben, we miss you terribly.
Posted by Michael Yeager at 5:47 PM