A Weekend in Kuala Lumpur 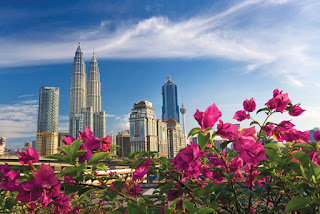 We needed to transport our grandson, Christopher, to his weekend boy scout camping trip in the mountains outside of Seremban, a town just south of Kuala Lumpur, Malaysia. My wife, Katie, daughter-in-law, Nani, and I decided to take the opportunity to explore Kuala Lumpur, so we booked a hotel for two nights. KL(as they refer to it here) is about a four hour drive from Singapore. After crossing the border into Malaysia we drove into Johor Bahru looking for a coffee shop. We found two across the street from each other. Like at home in Washington, you don’t have to look very hard to find good coffee.  We found a café with a totally open front, like a garage. 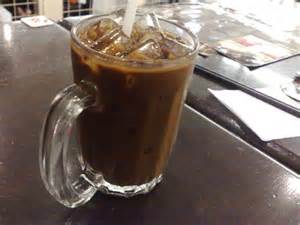 We ordered iced kopi with condensed milk. Christopher got apple juice, which was bright green and slightly sour. Beyond the overhanging café roof, the sun shone intensely bright. We were tucked back in the cool shade under fans slowly turning above our heads. Two old men sat at one of the outside tables, talking and drinking strong coffee from tiny cups. A skinny white dog crossed the empty, dust covered street. Our waitress, a round faced pleasant looking young woman wearing a midnight blue hijab(head scarf), counted money at the counter. For a short period of time, I had one of those moments you strive for when traveling, totally peaceful, present, and aware. I intensely appreciated being in these exotic surroundings.


The Malaysian highway is four-lane all the way and in great shape. Beautiful countryside rolled by, hills thick with lush green plants. We passed acre upon acre of palm groves. After dropping Chris at the designated meeting place, we continued on to
Kuala Lumpur. Our recently remodeled hotel was in an old part of the city, located on the corner of two alleyways. It was the nicest building in the surrounding area.
Our freshly painted rooms were on the 7th floor. On the ceilings were drawings of bugs,  our room had dragon flies and Nani’s room had beetles. Even the light fixtures by the beds were bugs, fashioned from tea strainers and wire. These looked like giant mosquitos, an ominous warning of the night ahead. 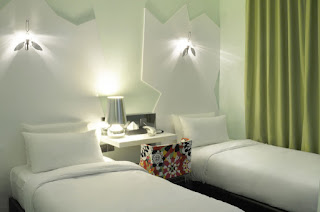 It was already getting dark, so we stashed our luggage in the rooms and ventured out into the city in search of dinner. We entered a restaurant that served Yemen food. Two women patrons were wearing black niqabs. The evening was hot and humid and they were covered from head to toe, only their eyes were visible. It must have felt like a sauna inside those things. The waiter placed a free standing screen around one couple, so that the wife could eat without anyone seeing her. The other woman had help from a normally dressed friend who held the material away from her mouth for each bite.  I wondered if these two women chose to wear the burqas out of religious conviction or were forced to. I assume it was a requirement for their type of Islamic faith. The food was so-so. 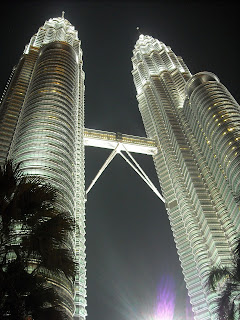 After dinner we walked to the Patronas Towers, huge and magnificent, lit
up against the night sky. We didn’t go up into the towers, but walked around in the bottom which is a shopping mall with expensive stores. We returned to the hotel, showered and went to bed. At 11pm we woke soaked with sweat. The air conditioner was off. I called the front desk and was told that the electricity had gone out in the entire hotel and that they were looking into it.

I made the mistake of using my Washington state reasoning and opened the window. The humidity must have been 90%. It was stifling and the sewer system in the alley below us must have been backed up, because the smell was horrid. We took turns standing under the shower to cool off, but the water was warm, so it had a minimal effect.
A flock of wild tropical mosquitos found our open window and came in to torment us. I pulled the curtains to block their buddies, turned on my mini emergency flash light and the mosquito hunt began. Methodically we tracked down and annihilated each and every one of them.  At least this activity kept our minds off how hot and miserable we were.  At 5am, the air conditioner sprung to life. We rejoiced. The night from hell was over. 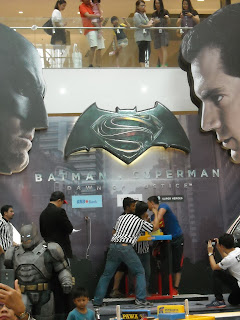 First thing, after catching a few hours of sleep, I complained to the management and they cut the price of our next night’s stay in half. We spent the day wandering around the city. At a posh mall, we had an excellent Japanese lunch. The entire floor was dedicated to all things Japanese. On the bottom floor the mall was promoting the film “Batman versus Superman”. The Batmobile was on display and there was an arm wrestling contest for young men. 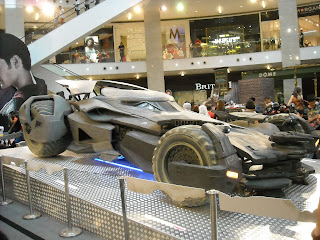 That evening after stuffing ourselves on chicken wings and beer at the Jalan Alor market, the three of us indulged in a Thai message. 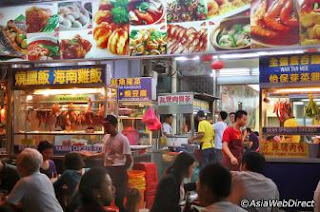 Nani and Katie went for the foot massage and I got the full body treatment. My masseuse was a short chunky Thai woman and she knew her business. She asked me to change into a pair of black pajamas and then returned to begin her regimen of torture.  She walked on my back, and up and down my arms and legs. She sat behind me and I sat between her legs and she pulled me back on top of her  while twisting my arms and shoulders and jabbing me with her elbows, heels and knees. I wanted to scream out in pain. At one point she stopped and asked if I was alright. I think I was whimpering or maybe I was begging her to stop. I didn't realize how much pain was in my body and she found every bit of it. Surprisingly, when she was through torturing me, I felt extremely relaxed.
That night our air conditioner performed beautifully and we slept like babies. Christopher and the boy scouts showed up right on schedule and a few hours later, we were crossing the Strait of Johor, inching our way through customs back to our temporary home to Singapore.

Posted by Michael Yeager at 4:09 AM