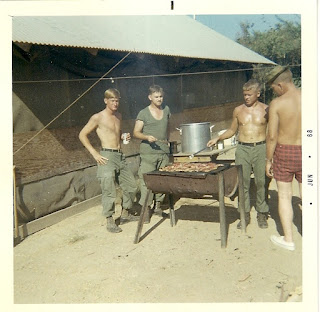 When I decided to return to Vietnam after almost fifty years, I’m not sure what I expected to find, but one thing I hoped for was a feeling of connection with my fellow soldiers who lived and died there. Perhaps a sign that our sacrifice had some meaning.


There are three main war attractions advertised for tourists in Ho Chi Minh City. The Cu Chi tunnels, the Reunification Palace (formerly Independence Palace) and the War Remnants Museum. The Cu Chi Tunnels tour was an all day affair and we planned only one day in the city. The brochure advertising the tunnels showed a woman tourist barely able to squeeze down a hole in the ground. During the war I had the opportunity to crawl into a tunnel that had already been cleared of the enemy but I declined. I had no problem passing on it a second time either.  The US soldiers whose job it was to do the clearing, were called “Tunnel Rats”. They had to be small in stature to fit in the holes. I don’t think civilians can appreciate the level of courage some soldiers in war must have on a daily basis and the Tunnel Rats were some of the most courageous. 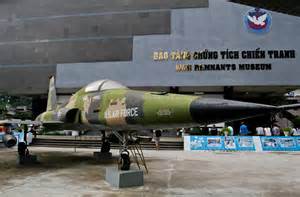 The Reunification Palace was closed because of some sort of convention that day. So that left the War Remnants Museum. From 1975 until 1995 it was called the “Exhibition House for Crimes of War and Aggression”. When Vietnam’s relations with the US normalized, the name was changed to the “War Remnants Museum”, but as I was about to find out, the exhibitions stayed true to the original name.  I would caution my fellow Vietnam Veterans about going to this museum. I felt terrible during and long after our visit there. I did not go to another military attraction for the rest of our two week long trip in Vietnam because of it.


Upon entering the grounds, a deformed man approached us offering to sell us a variety of books. He had no hands and said they were been blown off by an unexploded mine. I tried to give him money, but he said he didn’t accept charity, so I bought a small book for a ridiculously high price. 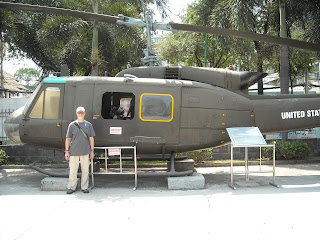 Sitting on the grounds outside the museum are US military weapons and hardware- planes, tanks, artillery pieces, etc.  Katie took my picture next to a Huey. I flew around in Hueys  a lot during the war. The helicopter pilots and their crews were also some of the bravest men I’d ever met. They put themselves in harm’s way repeatedly to save soldiers’ lives, including mine. The sight and sound of a Huey will always be a positive symbol for me. 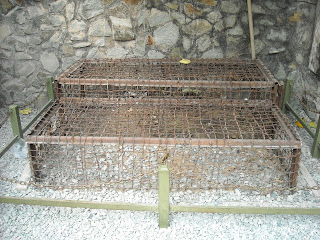 The first exhibit was along the side of the museum building. The theme was torture. There were pictures and implements of various ways the French and American soldiers tortured Vietnamese prisoners. There were metal cages, leg and wrist irons and even a guillotine with which, they claim the French used to behead people. In a display case along with other implements of torture, was an US army field telephone. The label next to it said, “A military telephone set transformed into a torture instrument which can discharge electric shocks to the tortured.” 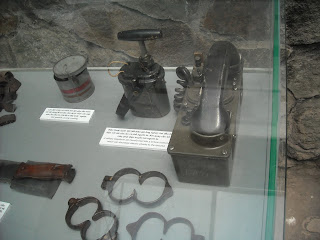 My job for much of my tour in Vietnam was as a POW Interrogator. The field telephone was our primary method to get uncooperative detainees to talk. I didn’t like to torture detainees and part way through my tour I became somewhat of a pacifist. Subsequently, I was not a very effective Interrogator with the hard core prisoners. There is way too much I could write about this, but suffice it to say that seeing the field telephone brought up some deep emotions. But foremost in my thought was, what about all the cruel and inhumane things the VC and NVA did to American and ARVN soldiers, and innocent villagers. I witnessed plenty of cruelty on their part. I guess there is one sided propaganda spun by both sides. 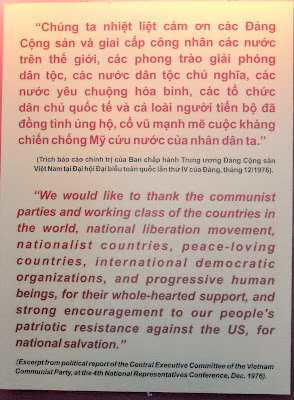 Inside the museum on the main floor were pictures that chronicled the evolution of the war from the Communists’ perspective. Eisenhower and Kennedy were written about unfavorably and there was a picture of President Johnson looking like the devil himself. The only pictures of American soldiers were those depicting them in acts of violence against the Vietnamese people. There were displays on the effects of agent orange, fire bombing and napalm. I had seen these atrocities first hand 49 years ago and did not want to see them again. I grabbed Katie's hand and moved on. At one point I had to stop, sit down and breathe. I longed to connect with another Veteran. I even stopped and asked a couple of men tourists who looked about my age if they happened to be veterans of the war, but none were.


One section was devoted to pictures of American war protesters.  They were characterized as being rebels for truth, similar to the Communists themselves. Upstairs in a large room were pictures and biographies of western journalists who died covering the War. They too were heroes of the west, dedicated to telling the truth about the war, through their reporting of the war atrocities. And of course the My Lai massacre was highlighted.


As I watched tourists casually taking in the pictures and displays, and reading the propaganda plaques beside each one, I wanted to yell out to them that the only reason the protestors and journalists could speak out or write about the war in this way was because of our American Constitutional rights of freedom of speech and freedom of the press. The Communists were misusing these freedoms, which they still deny their own people, to support their one sided interpretation of the war,


My emotions were all over the place. I broke down in tears several times, I became intensely angry at the Communist sons a bitches and by the time we finished wandering around the museum I felt numb and exhausted. 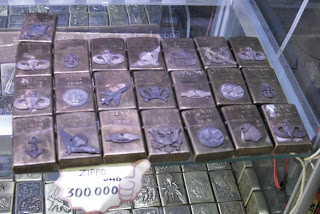 A display case in one of the souvenir shops outside the museum had cigarette lighters with American military unit insignias, years of in-country service and engraved sayings. Sayings like: “We the willing, trained by the unskilled to do an impossible job for the ungrateful” and “You have never lived ‘til you almost died, for those who fight for it, life has a flavor the protected will never know,” and “If you think sex is exciting, try incoming”. I don’t know if these lighters actually belonged to soldiers and sailors, but as I looked at them and read the inscriptions, I felt a deep connection with the guys I served with and all those who participated in the war. The Vietnam “American” War will probably go down in history at best as a big American blunder and at worst as another example of America’s unwarranted aggression in the world. I realized I would not find redemption or whatever I was looking for in the war museums, sites and displays. It would have to be found elsewhere, if at all.

Posted by Michael Yeager at 1:53 AM