(This story is de 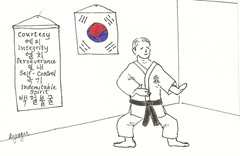 When our son, Ben, was six, he and I enrolled together in Taekwondo classes. Ben took to it right away. He had great flexibility and learned the moves fast. But, like his dad, he was not very aggressive and so we both needed help and encouragement when sparring. Taekwondo training requires students to do a lot of sparring and it definitely helps if one is aggressively competitive. At exhibitions Ben and I would demonstrate the forms along with the other students. Ben was often used as a model student to demonstrate flexibility. He could do a side kick way up above his head. To my surprise, I was used to demonstrate a spinning heel kick where I broke a board with my heel. Neither of us was ever used as examples in sparring.

Taekwondo is a regimented sport. The warm up exercises are always the same, the belt system has prescribed techniques and forms for each level and the students have to learn all aspects of the system to advance. The head instructor or Sabonim made sure all the kids had time to do their school work and could demonstrate passing grades by bringing in their report cards. The higher the belt, the more responsibility was given the student no matter what age. Neatness and cleanliness were the rule; uniforms were to be kept clean and pressed and belts properly tied. All equipment and clothing were stored in their proper place. Correct martial arts etiquette was expected of everyone, lower belts bowed to higher belts. When classes began, everyone lined up according to their rank, quickly and with no talking. Drills and exercises were performed by the Korean numbers with the students echoing the instructor. This particular Taekwondo studio or Dojang ran like a well oiled machine. The students were motivated, happy and proud.

I first noticed the Karate guy one day when I was stretching before class. He was in the corner talking to Sabonim. Our Sabonim was in superb shape, his uniform always neatly pressed and stark white. The Karate guy really stood out standing next to him. His belly bulged out so that the black belt around his waist angled down in front, his uniform was the color of old teeth and it was all wrinkly. He appeared to be in his 40’s or 50’s and was balding on top. During class Sabonim introduced him as a friend and a Karate Master. We were told he was some kind of champion fighter and would be helping out with sparring. I think a lot of us thought at the time, “Yeah right, this overweight frumpy looking guy.”

When my turn came to spar, I did a good job of blocking my opponent’s kicks and punches, but had trouble landing any of my own. Sabonim pulled me aside and said that Mister whatever his name was (the crumpled Karate guy) was going to help me. The Karate guy and I walked over to the corner of the room. He said he had watched me and could tell I had a lot of natural ability and some training, but that I was not staying grounded. He said I was so busy defending myself, I was missing many opportunities to score against my opponent. “You’re bouncing around out there losing your focus and doing all kinds of techniques that aren’t effective.” He said that when he learned to spar in Karate, he was only allowed to use one or two techniques. “I would hold my ground, wait for an opening and then execute my technique with total focus and complete dedication. If the technique was effective, the fight would immediately stop, and I would bow to my opponent.” And for emphasis he bowed to me as if I were his sparring partner, “My opponent would bow back.” I bowed to him, why not play along? “And only then would we resume the match.” Then he said something that has stuck with me all these years. “When you’re out there on the mat, sometimes you’re the teacher and sometimes you’re the student. Bowing to each other reminds us that students need to be grateful and teachers humble.” After being tutored by the crumpled Karate guy I never again had problems with competition or with the concept of winning and losing.

After our class was over I stayed to watch the black belt sparring class. I wanted to see this Karate guy in action. The Taekwondo black belts were good fighters; I’d watched them many times before. Sabonim made sure each black belt had a chance to spar with the Karate guy. By comparison, the black belts did a lot of bouncing and jumping around keeping a good distance between them and the Karate guy who just shuffled back and forth, easily blocking the kicks and punches that came at him. But then all of a sudden, he would shuffle in close to his opponent placing a punch, kick or push that usually sent the black belt tumbling to the mat. I couldn’t believe how fast this chubby guy could move. I watched as he patiently waited for the moment when the black belt was vulnerable and easily put off balance, usually when they were spinning, jumping and/or kicking. After a while I noticed the black belts began fighting differently. They looked a lot more grounded and focused and were careful not to take their eyes off the Karate guy for one second. And they stopped throwing those fancy kicks. I also noticed Sabonim standing on the sidelines enjoying the whole process.

Posted by Michael Yeager at 6:53 AM