I have this theory that we all have a true-self. This true-self is our unique personality expressing the Divine. The true-self is positive, creative, curious and loving. It naturally expresses a joie de vivre. We can all recognize it in a child, a puppy or kitten, but rarely do we recognize it in ourselves. It is the nature of the true-self to be happy and to spread the happiness around. Being creative and doing for others is the work of the true self.
In retirement I’m again more easily able to get in touch with my true-self. Without the responsibilities of household, work and career life takes on a lighter more playful quality. In the 90’s I read a book called Silencing The Self, Women and Depression by Dana Jack. Her theory was that when the natural exuberance of the self comes out in young girls, it is often put down by the adults around them, at home, at school etc. Consequently it gets buried and covered over by a false persona. This leads to problems including depression and unresolved anger. I think this phenomenon happens to all children to a greater or lesser extent. Not only does our true-self get squashed by the adults in our lives, life experiences often produce disillusionment and consequently our enthusiasm for life gets lost along the way. When I worked as a counselor, I noticed that in an atmosphere of total acceptance and validation, some clients again feel safe enough to let their true-selves emerge.
When I was sorting through some old family slides, I ran across a picture of my self at about age 10 or 11. It was taken on a sunny, crisp fall day. I am standing next to my dog with my Daisy BB rifle in one hand gazing at some horses in a dry pasture. It was taken on a family outing at a farm in the Ozarks. At first I thought the reason I liked this picture was because of the way I was dressed. I am wearing a baseball cap with the bill curved just the way I liked it, a kid’s WWII bomber jacket with a fake fur collar, blue jeans and boots. I do like the clothes, but what really attracted me to the picture was I am closely reflecting my true-self. I loved wandering in the hills around this farm with my dog. Even though I carried my BB rifle, I wasn’t a hunter. It was more for the Daniel Boone feeling and effect. I did like shooting at old cans if I came upon one. You can tell by the picture that I am attuned to the natural world around me and feel happy and free. 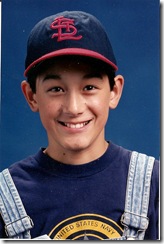 On my desk is a picture of Ben, our son, who died at age  28.  He has on one of his favorite baseball caps, an exact replica of an old St. Louis Cardinals team, and his long sleeve Navy Academy shirt. Over the shirt he is wearing farmers’ overalls with one of the shoulder straps falling away. He usually had one of them unhooked altogether because that was ”rad” at the time. I think he reluctantly hooked it for the picture. I questioned my choosing this picture for my desk instead of a more recent picture. After thinking about it, I realized that when he was the age of the picture, we still did a lot of things together. His parents weren’t totally “nerdy” yet and he enjoyed hanging with us. He was an integral part of the family at this time and contributed his creativity, humor and thoughtfulness to the group. I’m not saying there weren’t problems, there are with all kids, but at this age his true-self was less hidden.
At about this time we tried getting into baseball together. Neither of 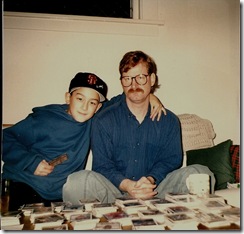 us had the time nor interest to watch many of the very long games, so instead we started collecting cards. We would spread them out in the living room and spend hours looking at them and reading the backs out loud to each other. At this time in the 80’s, they had just begun to market big league baseball hats for the general population. Ben and I loved the hats. We went back and forth on which big league hat we liked best. I finally settled on the Mets hat of the time because it was a combination of the old Brooklyn Dodgers(the blue color) and the New York Giants(the orange NY). Ben decided he liked the Texas Rangers hat best. One of his favorite players, Nolan Ryan, was on that team and he loved the big “T” on the front.
When he got older and things got more complicated, I loved to see his true-self shine through when we were together. He thoroughly enjoyed being with friends and family, especially his little nephews. He was playful, light and funny. There was an openness and excitement about life that came out in a gentle and loving way. That true-self is captured in the picture on my desk. After his death we discovered pictures his friends had put of him on their facebook and myspace pages on the internet. I see that light gentle spirit in these pictures too. This is what so many of his friends talked about at his memorial. One young man said what he really liked about Ben was when Ben introduced him to people, he would put his arm around his shoulder and refer to him as “my really good friend” and the young man said he knew that Ben meant it and it made him feel good.
I like to think that this true-self is our Spiritual nature and it is what goes on after the body dies. There was a great woman Saint from India named Anandamayi Ma. She was an Avatar, an enlightened person from birth. She stated that she would eternally be a young girl, and she lived into her 80’s. Even in old age she retained a childlike innocence and playfulness. The great religions tell us that to become enlightened, or to awaken to our true nature, or to enter the kingdom of Heaven, we must become as little children. Ben helped me get in touch with my more innocent playful side. I look forward to our true-selves being and playing together again.
Posted by Michael Yeager at 11:21 AM