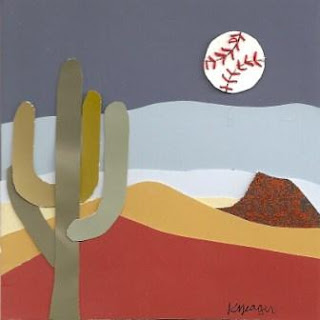 Katie and I went to one Cactus League spring training baseball game in Tucson. It was between the Colorado Rockies and Arizona Diamondbacks at Hi Corbett Field, where the Rockies have based themselves since 1993. It turned out to be the last game of the spring training season and the last game ever for the Cactus League in Tucson. Major league baseball has had spring training in Tucson since 1946 when the Cleveland Indians came here. They stayed until 1992. It all began at Hi Corbett Field. The Diamondbacks have been basing themselves at the Kino Sports Complex since 1998 when the franchise began, along with the Chicago White Sox, who moved north in 2008. Next year all the Cactus League teams will be in the Phoenix area. Colorado and Arizona will occupy a brand new stadium in Scottsdale and no longer have to ride a bus back and forth to play the other teams.

We are not avid baseball fans, but thought it would be fun to see at least one game. Little did we know it would be the very last game played here. It wasn’t much of a game, not much action and low scoring. All but two of the players were unknown to me. Jason Giambi played for Colorado. He was a great player for the Oakland Athletics and then the Yankees before that. The other player was Matt Williams who wasn’t playing at all. He must have retired while I ignored baseball and was now the first base coach for the Diamondbacks. He also had been a great all around player and power hitter. Both of these guys admitted to using steroids. Williams didn’t make it into the Hall of Fame when nominated, probably because of it.
In the history of baseball, people will look back on the Steroid Era and judge the players and the records they hold differently. Maybe in the stats there will be an “*” or “S” next to the number meaning “Achieved while on Steroids”. Many great players and record holders, which include Mark McGuire, Sammy Sosa, Alex Rodriguez, Roger Clemens and Barry Bonds, bear careers tainted by performance enhancing drug use. I feel bad for these players. They got caught up in something that was unique to their time. Along with Pete Rose, who succumbed to gambling, I believe these players would have been great anyway. They are the sacrificial lambs that helped clean up baseball--for the future.
Baseball was the most popular sport of the 1950s and early 1960s. I don’t remember following baseball all that closely then either. My dad used to listen to the Cardinals’ games on the radio. I liked hearing them in the background while he did chores around the house or relaxed with a beer on a hot summer evening.
However, I loved playing baseball as a kid. Most summers I played on a little league team. I wasn’t a great player, but adequate. I played third base which was called the “hot box”. Most kids were right handed and when they really connected with the ball, hard hit grounders and line drives flew right at the third baseman. I practiced long and hard and was serious about the game. The highlight of my baseball career was playing in the Little League all star game at Busch Stadium. They put me in the outfield for this game. My biggest fear was that I would embarrass the team playing with kids who were much better than I was. I didn’t. I caught everything that came my way, made good throws and the two times I was up to bat I walked and got a single. Those pitchers could throw the ball fast and had perfected the curve ball. Funny, I can’t remember if our team won or not.
My hero in those years was Stan “the man” Musial. He played left field and first base for the Cardinals and did everything well. He was not a grand stander, but played with humility and grace. A lefty, he had an unusual batting style. Keeping his feet close together, his whole body made a subtle circular motion. It looked like he was winding up his energy and boy, could he hit! I looked up his career stats and he had a lifetime batting average of .331, for career total bases he is second behind Hank Aaron, 9th for runs scored, 4th for career hits and 2nd for doubles. On all the records that demonstrate consistent hitting throughout a career, his name is up at the top.
On one summer evening, my dad planned to take my friend Paul and I to his restaurant in St. Louis, Stan and Biggies. We wanted to meet our hero. As luck would have it, I got sick and couldn’t go. They went anyway and Paul got a chance to meet him getting an autographed picture that to this day he likes to show me. I probably could have arranged to go back another time. For some reason I always think of this as a once in a lifetime missed opportunity. I think Stan still owns the restaurant to this day.
My son, Ben, and I tried to follow baseball in the ‘80s. It is a time consuming hobby. We petered out after a season or two. The games are so long and there was entirely too much talking, spitting and scratching to continue to hold our interest. I’ve always admired people who follow a team and know all the players though.
Katie and I didn’t quite make it to the end of this final Cactus League game. In about the 5th inning a fly ball was hit our way. Everyone around us jumped up and threw their hands into the air. We couldn’t find it and we were certain it was coming down on our heads. The boy next to Katie in all the excitement kicked over his strawberry squishy and for the rest of the game there was a sticky mess at our feet. The fly ball didn’t hit us, but our butts were sore from the hard bench seats and still very little action in the game. Our minds started to drift to where we were going to go out to dinner and before you no it we were on our way out of the stadium. I was hoping this game would spark my desire to follow baseball more closely. But man those games are long.
Posted by Michael Yeager at 10:17 AM