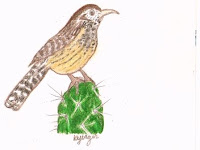 To increase the quality of our retirement experience, Katie and I are attempting to take a more active interest in the natural world around us. We’ve always enjoyed the outdoors but have been what you might call passive observers of nature. This is evident in our attempts at bird watching. The birds need to come relatively close to us and then hold still for a little while if we are going to observe them. We quickly lose patience with uncooperative birds. Our motivation intensifies if the bird is colorful. We don’t spend much time looking at grey and brown birds. Happily, many of the birds of southern Arizona seem colorful or unique, at least to novice birders like us. The birds need to work a little on their cooperative behavior, however.

To help further our naturalist endeavors, last week we went to Madera Canyon for a guided nature hike. The guide was the head of volunteer educators for the canyon and he proved to be extremely knowledgeable about the plants, animals and geology of the area. Most of what he told us I’ve already forgotten. For some reason I can’t keep a lot of these facts about the environment in my head. Katie has a special interest in local plants and so while the guide talked, she busily wrote plant names in her little book.
The guide knew that some of us were interested in birds, so whenever one was spotted, he would identify it and then tell us a little about its behavior. Once when someone in the group spotted a bird soaring in the sky, the guide swiftly lifted his binoculars up to his eyes, gazed for a second or two and then said “Coopers Hawk”. I stood there after the group had already moved on, fumbling around with my binoculars trying to find the damn thing. I could spot it with the naked eye, but each time I tried to find it in my binoculars I saw nothing but blue space.
I caught up with the group down by the stream. Someone else noticed a bird flitting around in a tree. The guide said it was a Ruby Crowned Kinglet. He didn’t even use his binoculars this time. He said he could tell by the way it moved. I saw it jumping around in the tree. Every time I had it in my view, it jumped to another branch and I had to relocate him. I can see why Audubon shot the birds in order to get a good look. I did manage to get fleeting glimpses of it though. I noticed it was a small bird with some yellow on its underside, darker on the back and had big eyes. Later I looked it up in our bird book. There are so many little yellowish birds in this area I could never have positively identified it from my brief look. Then a flock of Mexican Jays flew into the trees near our group. The guide had us watch them for a while. He asked us to notice their behavior as a group. He told us that the dominant male and female mate and the junior members help protect and feed the babies.
There are a few birds I am getting more familiar with. For example there is a bird that seems to be everywhere around Green Valley. I heard it before I ever saw it. It has a call that sounds like the way my dad used to whistle to wake my sister and me up in the morning. For a long time I just called it the “Dad Bird”. One day I heard its call and was 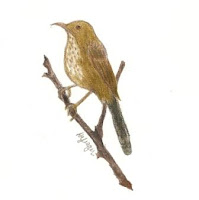 determined to find it. I spotted it sitting on top of a Barrel Cactus doing its “dad-bird” call. It’s a medium sized brown bird and the bill is slightly curved. I looked for it in the book and I think it might be a Bendire’s Thrasher.

Identifying birds has both a positive and negative side. Once I know a bird well, like a Robin or a House Finch or a Sparrow (actually I shouldn’t include Sparrow as I’ve noticed there are many different kinds with really subtle differences between them), I tend to quickly identify it and then not give it another thought. For example, after the guided nature hike, Katie and I stopped at a local coffee shop. While sitting having our lattes she spotted some birds flying in and out of a Saguaro cactus across the street. I grabbed my binoculars and positioned myself in a chair out front across from the cactus. I focused the binoculars on the hole in the cactus and sat patiently waiting for the mystery bird to appear. Finally a dark bird flew quickly into the hole and then out again. It flew over to where I was sitting and landed about ten feet away from my chair. It then began rooting around in the gravel. It was a Starling or as they are sometimes called “a rat with wings”. I felt disappointed and stopped watching and shifted my attention to my rapidly diminishing latte.
The other evening my neighbor, a former university professor of geography, and his wife were sitting out on their patio. I stopped to talk with them and noticed binoculars lying on the table. I asked what he was looking at and he said he’d been watching a couple of Ravens building a nest in the big tree across the yard. “I’ve been watching their progress for several days now.” My thought was that once I realized it was only a couple of noisy Ravens, I wouldn’t have continued observing them. But yet he was keenly interested in their activities. There is a qualitative difference between how my neighbor and the guide in Madera Canyon look at nature and how I look at it. They don’t have to work so hard at motivating themselves like I do. They are genuinely interested in the natural world around them, like the true scientists they are.
There is another bird I am trying to identify. It has a very obnoxious way of chattering at about 5:30 every morning. I’m thinking about using the Audubon method to identify this particular specimen.
Posted by Michael Yeager at 1:07 PM