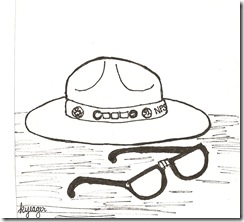 Email ThisBlogThis!Share to TwitterShare to FacebookShare to Pinterest
Labels: Retirement

Inspired by a Politician and a Folk Singer

d much in politics over the years. In 1988 I  volunteered as a delegate for Gary Hart’s presidential campaign. I went to only one of the delegate meetings and decided I couldn’t stand all the boring speeches and bureaucratic BS, so I quit. Soon after I dropped out, that picture of Donna Rice sitting on Mr. Hart’s lap became public and his campaign collapsed.
The first time I got fired up about a political candidate was in 1972. I was a student at the University of Oregon and the candidate was George McGovern. Interestingly, Gary Hart was his campaign manager. At that time the student movement against the Vietnam War was in full swing. I, too, was against the war, but as a Vietnam veteran I didn’t feel comfortable joining in with the other students who were often against the soldiers as well. The protesters managed to get the Army ROTC program kicked off campus. I was opposed to this. I felt we needed educated officers in the Army instead of what we called the “90 day wonders”, officers who went through OCS. I participated in only one march and that was “Vietnam Veterans Against the War”.
George McGovern was a decorated WWII bomber pilot. After the war, he became a History and Political Science professor. I thought he was extremely intelligent and capable of becoming a great President and Commander-in-Chief. I was excited when he came to the U of O on his campaign rounds. He pledged that within 90 days in office he would pull the U.S. out of Vietnam in exchange for all of the POWs. The Vietnam War went on until 1975. Think of all the lives that would have been saved if he had won. His campaign rally was inspiring. In addition to his opposition to the war, he talked about America’s need to wean ourselves from our dependence on fossil fuels and to develop sources of energy more friendly to the environment. He also talked about reforming the health care system so that all Americans could be covered affordably.
Around this time, I was working at the Eugene Airport as a parking lot attendant. It was the perfect job for a student because there were long periods when nothing happened. This afforded me time to study; my grades improved considerably after taking this job. The morning after the McGovern rally, a lone RV pulled up to exit the lot. The driver was a big man wearing a cowboy hat. As soon as he was alongside the toll booth, I recognized him. It was Hoyt Axton.
After I returned from Vietnam I still had over a year to serve on my enlistment in the Army. I was stationed at Fort Hood, Texas. Having been out of the country for a year, I had a lot of music to catch up on. It was the end of the ‘60s and the new music that was emerging was folk blended with rock and country. There were a few artists/albums that I became passionate about. I listened to them over and over again lying on my bunk in the corner of the barracks. They helped me heal from my year in Vietnam. The albums were: Tom Rush,The Circle Game, Eric Anderson, ‘Bout Changes and Things , Richie Havens, Mixed Bag, Leonard Cohen, Songs of Leonard Cohen and Songs From a Room and Hoyt Axton, My Griffin Is Gone. I felt I knew these musicians intimately and owed them a huge debt of gratitude for their sensitive, heartfelt music that came at a time when I desperately needed to feel hope about life.
When Hoyt pulled up alongside the toll booth I said, “Aren’t you Hoyt Axton?” and he replied, “What’s left of him.” He told me about his months working for the McGovern campaign and how it had totally worn him out. We shared the hope that McGovern would win the election. I mentioned that just a few days before, I had bought one of his albums, but being somewhat star struck, I couldn’t remember the name of it. He mentally went through a list of his albums, and we finally decided it was Country Anthem.  He  asked if I had his most popular album, Joy to the World. I told him I didn’t. He disappeared into the back of the RV then reappeared handing me the LP. I didn’t think about having him sign it. He wished me good luck and took off down the road. I also neglected to tell him how much, My Griffin Is Gone, meant to me when I was in the Army.
McGovern lost the election by a landslide. I guess the country wasn’t ready for his “progressive” ideas and as we now know, Nixon  ran a ruthless  campaign. But McGovern is alive and well, living in South Dakota with history on his side. Hoyt died much too soon at age 61, but he lives on through his music and films. He gave us some American standards like Greenback Dollar and Joy to the World, but my favorite songs are on that 1969 album that I all but wore out when I was young and trying to find some sense to it all.
Posted by Michael Yeager at 4:37 PM No comments: