Dylan on the Jukebox 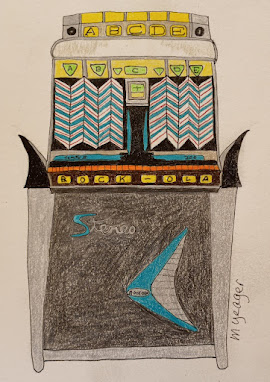 Just the other day Bob Dylan was awarded the Nobel Prize for Literature. For most of us boomers, this is world-wide validation of one of the main artists and driving influences of our generation. Only Elvis and the Beatles share such an exalted place in single handedly redirecting the popular music and culture of our time. The poets of our generation were the singer song writers--Joni Mitchell, Paul Simon, Neil Young, James Taylor, Jackson Brown, Carol King, and Leonard Cohen.
Dylan's music brought protest songs into the popular arena and influenced musicians to write and perform their own songs. Yet he was not widely accepted by the popular music listening audience. In his entire career, he never had a number one hit on the Billboard Top 100 charts and made it to number two only twice. In the sixties, most of Dylan’s popular songs were made famous by other artists, Blowin’ in the Wind, Peter Paul & Mary, Mr. Tambourine Man, The Byrds, It Ain’t Me Babe, The Turtles, All Along the Watch Tower, Jimi Hendrix.
In 1963 I first heard Dylan’s music. He was a “folk singer” and had only two albums out, Bob Dylan and Freewheelin. I’d like to say I liked him from the very beginning, but I didn’t. I thought he had an obnoxious nasally voice and was an even worse harmonica player. What I did like at the time was a girl who wanted me to like him.
Her name was Marley and she attended a local Catholic school. I met her at a party. That’s not exactly true, we first met at a local Steak & Shake. She was in the back seat of a convertible with three other girls. They pulled in next to the car I was in with three of my friends. She caught my eye immediately and smiled and said hi. My friends knew the other girls in the car. They all attended McCluer High and invited us to a party at one of their houses.
The party turned out to be just the four of us and the four of them. Marley and I hit it off right away and began talking about music. Her passion for folk and jazz equaled my own for rock & roll. We started seeing each other regularly and listening to music. And that’s all we did, listen to and talk about music. We became good friends and enjoyed each other’s company. I would have liked to have changed the friendship, but “dating” might have ruined it. Besides, I was too chicken to make a romantic move.
We influenced each other's taste in music. I began to like folk music and learned to appreciate Dylan’s hard edged poetic language that mocked cultural conventions and exposed the hypocrisies. I helped Marley appreciate rock & roll.
It was in 1965 on a week-long trip to Florida, where I first heard the fusion of folk music and rock & roll. I went with two of my high school friends, Petie and Jeff. We took turns driving Petie’s Corvair Monza convertible non-stop all the way from Ferguson to Fort Lauderdale. With the top down the entire way, the three of us were painfully sun and wind burned by the time we arrived. After renting a cheap motel room, we agreed on one important rule. If any one of us picked up a girl, the other two had to “get lost” for the entire night.
Over the course of the week, I became intimately acquainted with a bench on the boardwalk, while Jeff and Petie took turns in the motel room. One night while sitting on that bench, I heard Dylan on the jukebox. The music was coming from inside a pinball arcade directly behind me. I located the jukebox in the back of the arcade. The song was number B-25, Like a Rolling Stone. I plugged the machine with quarters and played it over and over.
The next morning, I called Marley long distance from a pay phone next to the highway to tell her the news, Dylan was playing rock & roll.
Posted by Michael Yeager at 5:00 PM 2 comments: