Learning From the Existentialists

I've been listening to a lecture series on existentialism. The focus is on philosophers Kierkegaard, Heidegger, Nietzsche, Camus and Sartre. These are some heavy dudes. The lecturer points out all the many ways they disagree and also the common philosophical thread that runs through their work:  the way to find true freedom in this life is by taking total responsibility for one's choices and one's responses to the events of life. This is called living an authentic life. An authentic life has passion and commitment. Most people live much of their lives in a reactionary mode. Almost everyone has brief moments of clarity, but the life of the ordinary person is generally unreflective in nature. The existentialists encourage us to live our lives in the present and make our decisions through reflective choice.
In conformity, one does the right thing because that is what's expected by others. Non- conformity is the other side of the coin. The rebellion of youth is an example of this. Both are reactionary ways of existing. Following the existential philosophy one may conform or rebel, but the choices are made reflectively and in this way one’s life becomes more “authentic”. Sartre found authenticity in the French underground. Rebelling against the Nazis gave him meaning and purpose that transcended his individual needs and wants. Viktor Frankl found it when he was a prisoner in a concentration camp. Helping the other prisoners gave him the meaning he needed to survive. The existentialists tell us that finding meaning in life leads to true freedom.
When I first attended college at Florissant Valley Community College in North St. Louis County, it was1965 and I guess I wasn't ready. I flunked out. My concerned parents sent me to a counselor, who advised me to go into the military. He told me “Not everyone is cut out for college.” But at some point during my Army experience, I decided I wanted an education. My heroes were writers. Not just writers, but writers and adventurers like Hemingway, Jack London and Jack Kerouac. Both Jacks were in the Merchant Marines for a while. When I was a soldier on my way to Vietnam aboard a Merchant Marine troopship, I enviously watched the sailors as they went about their daily chores. They worked hard and had purpose throughout their day, unlike us soldiers, the cargo, who had absolutely nothing to do. We sat or wandered around the ship with too much time to think about where we were headed. I imagined myself as one of those seaman, after a hard day's work, lying on my bunk in the evening, making entries in my journal for a novel I would someday write.
In Kerouac's novel On The Road, he describes living and working with migrant workers. He describes this as a deeply satisfying time in his life, doing exhausting work in the fields all day and then falling into bed at night tired but happy. The long tedious hours of back breaking work forced him to engage fully in life. For Hemingway it was imminent death that forced his characters into this open, honest and vital way of living.
Some of the existentialists spend too much time raging against normalcy. Reacting in a negative way to the bland, unaware, mundane, un-passionate existence of others is just another reactionary mode. Without compassion for the human condition, we miss the mark. When we truly face our own inevitable death, when we truly face our ultimate aloneness in the world, when we become quiet and genuinely reflective, we discover a deep connection with and compassion for all life. The peace and security people yearn for can only be found by letting go of striving for it. Totally accepting oneself in whatever situation one is in is the way to true freedom. The Buddhists' call it non-attachment or the middle way. Let go of all clinging and be totally present.
Posted by Michael Yeager at 7:06 PM 1 comment: 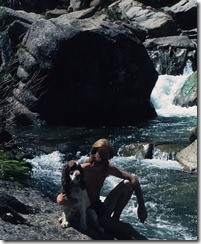 Murray had a stroke in 1990. His left side stopped working. When I took him to the Vet to be put down, we took a few minutes to sit outside the office by the side of a small stream. He knew something was wrong, but when he heard the birds chirping in the trees, his floppy ears perked up and he looked at me. Again I saw that little puppy. What do you say we go chase after those birds? I'm reminded of the Jerry Jeff Walker song Mr. Bogangles. “His dog up and died... after 20 years he still grieves.” It's been over 20 years since Murray died and I haven't gotten another dog and probably won't.
Posted by Michael Yeager at 7:27 AM 2 comments: