My Year in Vietnam

In 1966, like many young men my age, the US government forced me to make a choice. I could either join the military, go to jail or flee the country. I joined the Army.

I turned twenty in October of 1968 on a Merchant Marine troop ship headed for Vietnam. On the
month long voyage, somewhere out in the Pacific ocean, one fellow soldier jumped overboard and was never found. The rest of us had a good idea why he jumped.

﻿
We stopped in the Philippines and were allowed two days of shore leave. Some of us spent the day at the beach swimming and collecting beautiful brightly colored shells.

I spent most of my year living and operating out of the 198th Infantry Brigade Headquarters. This is a view from a jeep driving north on Highway 1.

This view is looking down at the base- camp from a perimeter bunker on the hills behind it. In the distance is the South China Sea.

I lived in this hooch with five other guys. We were all part of the 635th Military Intelligence Detachment. Several of the other surrounding hooches held personnel from our detachment as well.

We fixed up the inside by building a bar covered with grass cloth to give it a tropical look and surrounded it with empty bottles of alcohol that we had consumed. We each chose two playboy pinups and I put up a large drawing of Mick Jagger.  Dennis from Tennessee was our mechanic and company scrounger. He could get just about anything we wanted trading with the Air Force personnel up at the Chu Lai Airbase.

I worked as an Intelligence Analyst and a Prisoner of War Interrogator. This is the POW compound where the detainees were held before and after interrogation. 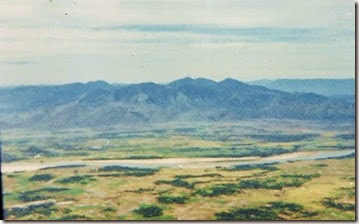 I flew around in helicopters for both my jobs. Mostly I flew in the Bell UH-1 Iroquois, better known as “Huey”. Hueys had two door gunners, so when the bad guys shot at us, we could shoot back.

Sometimes I flew in a smaller helicopter, the Bell H-13 Sioux. It was a light utility helicopter and had no armaments to protect us. The pilot either flew very high up, out of small arms range or very close to the ground, almost at tree top level. I always sat on my flak jacket and had my rifle ready to fire on these trips. It is an understatement for me to say, I went on some wild rides during my year there.

Anton was a small group of shops that sprung up along highway one. We took our laundry to Helen’s, where you could buy toiletry items, food  and souvenirs. In the back beautiful young girls, who should have been in school or at home with t

We each named our jeeps. The one to the right  says “dead chicken” in Vietnamese. I named my jeep “Luv”, spelled like the rock group. The Beatles told us that was all we needed and I think I wanted to spread a little more around.

We lived and worked with Vietnamese Interpreters. These young men were drafted into the army for however long the government wanted them. I became very close to these guys. I will never know if they survived after 1975 when the communists took over. 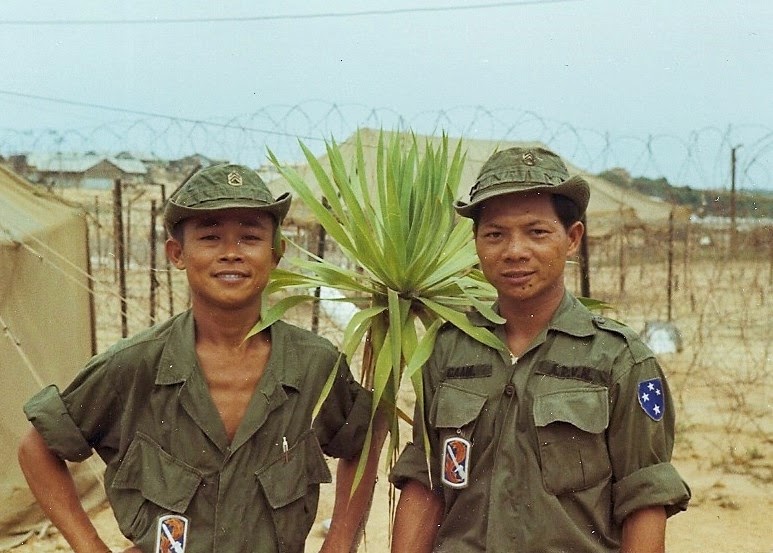 The two interpreters in the picture to the right were ethnic Chinese, but born and raised in Vietnam. They were not totally accepted by the Vietnamese, but they were both very good, honorable guys.

Each interrogator chose an interpreter to work with. I mostly worked with Chang  at our interrogation section in the base camp and out in the bush when we went on missions with the infantry. On New Years eve Chang was shot by not so friendly, friendly fire, but he survived and was able to return to our unit.
﻿
﻿﻿
Bao worked with Rob. Bao was college educated and spoke many languages including French. Rob also had a college degree and had lived in France for two years. So he and Bao conducted their interrogation sessions in French and Vietnamese.

Being in a war with others, you make close friends and have a great deal of respect and trust for one another. Rob was a fellow interrogator and helped me to quit smoking.

My friend Owen is barbequing at one of our many detachment cook outs. The little boy, we called Sam. He was sort of a company mascot. I don’t know if he had a family or was an orphan.
﻿
One night when both Owen and I were on perimeter guard duty, we were attacked. Owen, we called him OD, grabbed a radio and ran between bunkers and tanks and coordinated our defensive fire. He really acted heroically that night and saved our bacon. We  laughed about it later over a couple of beers.

Lt. Mitchell was part of the Imagery Interpretation section of our unit. I took this picture early one morning when he was waiting to go out on a flight mission to take surveillance pictures which would later be analyzed in the Imagery Interpretation van at headquarters. He was an avid reader like myself and we loved to discuss books.  L.T. was shot down on one of these flights, but luckily survived to tell the tale.

Vietnam is a beautiful country. I loved the culture, the country-side and the people. While I was there I tried to imagine it without a war. 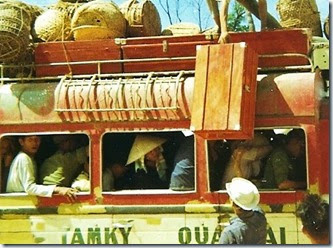 This is the bus from Tam Ky to Quang Ngai. As you can see no space was wasted.

I bought a Fujica camera at the Division PX. and decided I would not take pictures of injured or dead Vietnamese or Americans. There were too many to count, but out of respect, I put my camera away. 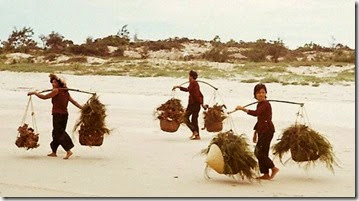 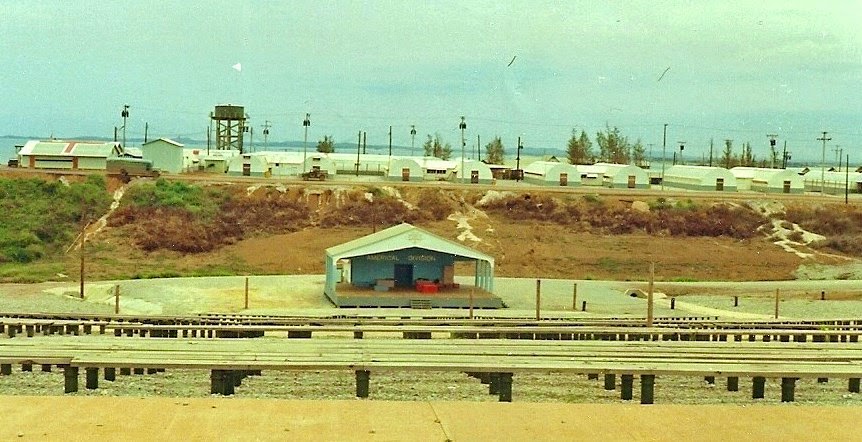 This is the amphitheater at Chu Lai, where in December we  saw the Bob Hope Christmas show. We all loved it and felt so much appreciation for Bob and his entourage.
In the background is the hospital where I interrogated many wounded Vietnamese and where the American dead and wounded soldiers were brought in from the field.

Rick and I went through Intelligence training together at Fort Holibird Maryland. Shortly after settling into the 198th base camp, he was transferred to a small Intel post in Quang Ngai City.

Mitch called me "Lil Bro" and introduced me to south east Asian cannabis. We shared a love for Motown music especially the Temptations and Marvin Gaye.

The  largest city I went to was Quang Ngai. Visiting my friend Rick there was a treat. We sat in restaurants and ate meat wrapped in leaves and dipped in nuoc mam(fish sauce) and drank warm Ba Moui Ba(33) beer.

﻿In January of 1968 the enemy launched the TET offensive. Rockets and mortars rained down on our base camp in the middle of the night. We ran for cover across the road, dodging tracer bullets and held up in a bunker thinking that we  would soon be over run.

Several hooches were totally destroyed and our motor pool took several direct hits. Many vehicles were destroyed. Our first Sergeant’s hooch took a direct hit also and he received shrapnel in his ass. We didn’t like our first Sergeant and thought that was hilarious. He survived and filled out the paperwork for a purple heart that he’d been hoping to get.
﻿﻿

Some American soldiers were killed that night in our base camp. I didn’t know any of them personally.

A few enemy soldiers were found dead within our compound, but we were not over run. The next morning we knocked  a hole in the side of our hooch and began building a humongous bunker so that if and when it happened again, we could quickly dive to safety. 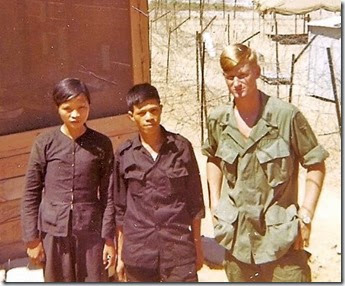 I am standing with a married Viet Cong (VC), couple who defected. They were part of the Chieu Hoi program,  a  propaganda campaign by the South Vietnamese government. Leaflets were put in artillery shells or dropped from helicopters over enemy territory. They promised defectors no retribution and a bunch of other positive benefits. I have no idea if the government kept their promise. I enjoyed talking with this couple and they gave us a lot of valuable information.

These little three wheeled vehicles transported civilians up and down Highway 1. One day I witnessed the aftermath of an accident. A tank had run over one of these vehicles, killing all the civilians. Women and children’s bodies were strewn all over the road. Later that day in the Tactical Operations Center (TOC), I overheard a Colonel arguing with someone over the field telephone about which unit should get credit for the enemy body count from this accident.

Here I am back “in the world” with a brand new MGB-GT which I bought for $3200 cash from my over-seas combat pay. Except for PTSD issues, I survived that year pretty well.
Posted by Michael Yeager at 10:43 AM 8 comments: