I first heard Leonard Cohen when I was stationed at Fort Hood Army base in Texas. I had a year left to serve. My unit was filled with Intelligence personnel, back from Vietnam like myself. The Army didn’t really know what to do with us. I was a POW Interrogator and Order of Battle Analyst and in Texas there wasn’t much need for my expertise, so they put me to work in the motor pool. I kept track of and ordered parts for vehicles.
I shared an open bay on the second floor of an Army barracks with a bunch of guys and two of them became good friends. Both Phil and Tony were excellent guitar players. In the evenings we would sit on the edge of one of our bunks and they would play music. Tony was a polished musician, having played in the LA clubs before being forced into the Army. Phil played an old Martin D-28 and finger picked like Mississippi John Hurt. I loved their music and wanted in. They helped me pick out a guitar in a Killeen music store and began teaching me how to play. I picked up some music books to help with the process and one of them was the “Songs of Leonard Cohen”. Tony was knowledgeable about all the folk artists of the time, and he introduced me to the music of Eric Anderson, Phil Ochs, Hoyt Axton, Jackson Browne (Tony knew Jackson from the LA circuit and they exchanged songs before Jackson had his first album out), Tom Rush and Leonard Cohen. Leonard had two albums out in 1969, Songs of Leonard Cohen and Songs from a Room. I loved his music. Unlike American music, his songs sounded more like the French singers, Jacques Brel and Edith Piaff. I guess this isn’t surprising, since he came from Montreal. I loved his poetry of existential/religious/symbolic language. He was intellectual and classy, in his natty attire, a "continental" man.   The guitar music in his songbook was in tablature, which shows you exactly where to put your fingers on the strings. Many of the songs were easy to learn on the guitar and I spent hours painstakingly learning a bunch of them. 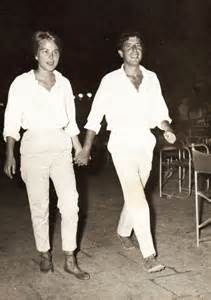 The songbook also contained biographical information about Leonard and pictures of his house on the Island of Hydra, Greece with Marianne, his beautiful Norwegian girlfriend and muse. For a twenty one year old boy back from the war and soon to be free with plans of travel and college, I was enchanted by Leonard and his lifestyle. I wanted to be him or some version thereof. Years later I got the chance to see him live. In 1993, Katie and I drove up to Vancouver, BC to attend a Leonard Cohen concert. Even then Leonard was not widely known in the US. His songs were not top 40 material. This was before his song Hallelujah, from his 1984 Various Positions album, became a huge hit.  At the time his most famous song probably was Suzanne made popular by Judy Collins on her 1966 album In My Life and Leonard’s first song on his first album. Here’s the last verse.
Now Suzanne takes your hand, and she leads you to the river, she’s wearing rags and feathers from salvation army counters, and the sun pours down like honey on our lady of the harbor, and she shows you where to look among the garbage and the flowers, there are heroes in the seaweed, there are children in the morning, they are leaning out for love and they will lean this way forever, while Suzanne holds the mirror, and you want to travel with her and you want to travel blind, and you know you can trust her for she’s touched your perfect body with her mind.

To my surprise, the concert at the Orpheum was packed and the audience knew the words to most of the songs. Like Joni Mitchell and Neil Young, Leonard was Canada’s own. With an exceptional back-up band and angelic sounding women singers enveloping and surrounding his low gravelly voice, his songs filled the beautifully ornate theater. It was definitely one of the music concert highlights of my life. Leonard has been part of my life since I was twenty. I wish I could have thanked him personally.
First verse of his song Anthem from the album The Future. A very timely message.
The birds they sang
At the break of day
Start again
I heard them say
Don't dwell on what
Has passed away
Or what is yet to be
Yeah the wars they will
Be fought again
The holy dove
She will be caught again
Bought and sold
And bought again
The dove is never free