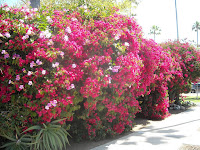 One of the compelling reasons to relocate after retirement is the new places that are easily accessible within a day’s travel by car. Last week Katie and I drove to the southern California to spend a few days by the ocean and drink in the moist cool air. After living in the desert for six months now, it was a refreshing break. We were in awe of the plant life that thrives there. Plants we are used to seeing as houseplants in small pots are outdoors and as big as trees. Around every corner we were greeted by sweet flowery smells, to me very exotic and to Katie reminders of home in Hawaii. And the food is so good. Any type of ethnic cuisine that California adopts seems to get better. California Mexican and Asian are our favorites. Where else would you find avocado in sushi?
We both have always been attracted to California. For me it started with the Beach Boys and the lure of the surfing lifestyle back in the ‘60s. But that was a young man’s dream. I think I could probably still surf at 62, but I definitely would have to slowly work up to it. My high schooler’s dream also had a lot to do with all the cute girls in bikinis. Well, they are still there on the beach, even though officially I didn’t notice. And I’m sure some of them would feel a tinge of sadness when they hauled ‘that old guy” off the beach on a stretcher after a major wipeout. This was definitely not how I envisioned my California lifestyle.
Being nomadic people by nature, we always size up an area when we first arrive, “How would it feel to live here?” This phenomenon starts out in an excited and romantic way, but as time goes on and the reality of a place makes itself better known, often the dream fizzles out. For me it fizzled out quickly. Katie fell under the California spell, easily seduced by the ocean and it’s cool moist air, the sunny mild weather, the colors and smells that remind her of home, the many Asian faces and of course all the good food.
The California dream soured for me with each passing vacation day. For starters, when we walked around the neighborhoods, we stopped and looked at the information sheets on some of the houses that were for sale. This shocked me back into the real world. Who can buy all these multi-million dollar homes? Certainly not retired counselors and social workers.
I’m an avid car watcher and California is a great place to see cars that I’ve only seen in magazines. In Arizona if I spot an expensive, well designed and crafted car, the driver invariably is an old person. I always conclude, finally in old age this person can afford the car they’ve always wanted. In California, however, the drivers of these fantasy cars are more likely than not, young people. Everywhere we went we found ourselves surrounded by young people and so many of them were fit and good looking. They were hopping in and out of their BMWs and Porsches, cell phones in hand and on their way to who knows where. I wanted to stop some of them and ask, “How can you afford to live here and drive this expensive car?” And by the way “What’s it like to drive that Porsche 911?” Of course I would never mention that their car costs more than our condo. And if they’d allow me a follow-up question, “How come you’re not at work?” Traveling around in these areas of great wealth, it’s easy for me to feel like Gomer Pyle goes to California. “Golly, would you look at that!” So the whole California dream morphed into “I feel like I don’t fit in here but man is it beautiful.” A puzzling thought occurred to me while we were there. It’s obvious that lots of people who live in California have lots of money, so how can the state be bankrupt?
I started writing this article at a coffee house right on the historic Pacific Coast Highway. This place was packed. Their lattes were great as well as the almond croissant that we split. I perused the flyers on the bulletin board next to the checkout counter while waiting on our order. Unlike the bulletin boards in Port Angeles where we used to live which advertised handyman services, cheap cord wood and bible study classes, there was an abundance of yoga and fitness teachers, psychic healers, self proclaimed gurus and meditation classes. And at the local bookstore, the section on drui 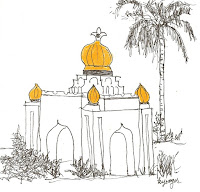 ds, witchcraft and channeling was larger than the literature section.
The highlight of the trip for me was visiting the Self Realization Fellowship Ashram that Paramahansa Yogananda established in 1938. The complex of beautiful white stucco buildings with red tile roofs surrounded by walkways through lush tropical gardens sits on a 17 acre property perched on a bluff overlooking the Pacific ocean. Just being on the property was enlightening. After wandering around for a while, we went to the information desk and were told by the receptionist that if we would like a tour of Yogananda’s private living quarters, we could join the retreat students at 2 p.m., so we did.
I read Autobiography of a Yogi when I was in college in the early seventies. I was very moved by the book and first learned about meditation from reading it. Also for about a year, Katie and I attended an SRF meditation group. The tour was led by a small elderly woman in monk’s robes who spoke softly with a heavy European accent. The home was modest in size with a living room, dining room, small study and one bedroom. She allowed each of us time to stand and gaze into Yogananda’s study where he wrote the book and several others and into his small bedroom where a pair of his shoes were still lying by the bed. Standing there gazing at the personal quarters of this great Saint brought up a tide of emotions and tears to our eyes. After the tour we walked over to the temple and meditated for a short while. The “vibes” were good so it was easy to settle into a peaceful state.
Southern California really is what heaven must be like. It’s too bad it’s already been discovered by a zillion people.
Posted by Michael Yeager at 8:09 PM