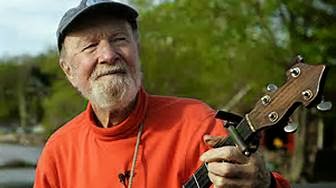 I watched Pete Seeger’s 90th birthday celebration on PBS the other night. It was at Madison Square Garden and many celebrities were there to sing his songs. Pete looked good for 90. He was dressed in his working man’s clothes, a flannel shirt, jeans and a baseball cap. He doesn’t have much of a singing voice anymore, but that didn’t stop him from directing the large audience in several sing-alongs including Amazing Grace. Among the celebrities were Joan Baez, who looks and sounds great, Arlo looking the same with white hair, Emmylou Harris, a country songbird, and Bruce Springsteen, who spoke eloquently and from the heart about Pete. Roger McGuinn performed Turn, Turn, Turn on his Rickenbacker 12 string guitar with back up and it sounded just like the Byrds..
I briefly met Pete in 1969 at the Oleo Strut Coffee House in Killeen, Texas. The Oleo Strut was right outside Fort Hood where I was stationed. It was one of many coffee houses that sprung up outside Army forts, where GI’s who were sympathetic to the anti-war effort could come together. If you’re interested in reading more about this movement and the Oleo Strut go to www.underthehoodcafe.org/history.
I had over a year to serve in the Army after I returned from Vietnam. Most of the guys in my Intelligence Detachment were Vietnam Veterans as well and many of us had been in Nam during the TET offensive of 1968. The belief in the futility of the war and the lack of trust in our politicians and military leaders ran rampant among my fellow soldiers. We could congregate and talk openly at the Oleo Strut.
One of my fellow soldiers in the intelligence unit was a CID Special Agent. I think he was a Warrant Officer, but I’m not sure, he didn’t wear any rank. He must have been straight out of Special Agent training school at the time and I know he hadn’t been to Vietnam yet. The CID was the part of Intelligence that investigated Army personnel. We used to see him at the Oleo Strut, trying to look inconspicuous. He avoided making eye contact with us because if he did we would give him a little wave of recognition which in his mind would totally blow his cover. We were certain he was keeping files on us. We razed him a lot about it with our “what the fuck” veteran’s attitude. By the way, this attitude was born and cultivated in Vietnam. Whenever we broke the rules like sneaking into the local village or stealing another unit’s property we would say to each other, “What are they going to do send us to Nam?” We rationalized that if they put us in the brig they would be doing us a favor. For many of us that attitude carried over into civilian life.
The evening Pete was playing, I went down to the Oleo Strut with my buddies, Tony and Phil. Pete was dressed like he had just come off day shift at the factory. He had on a work shirt with the sleeves rolled up, and workman’s pants and boots. His banjo hung around his neck. I don’t remember exactly what songs he played, but when he was through, Tony walked over to him and struck up a conversation. Phil and I joined them. True to his reputation, Pete was friendly and gracious. He was interested in our experiences as soldiers and what we thought about the war. He seemed to understand our dilemma of not feeling a part of the Army and the war effort and of not being accepted by the civilian population either. We were very grateful for his understanding and support and I hope one of us told him that at the time.
Tony asked him what he was up to and he told us about a ship he and some others were building, named the Clearwater. It was a Hudson Bay Sloop, following the blue prints of the old ships that used to run up and down the Hudson. He planned to sail it up and down the Hudson also, putting on concerts at the various river towns. His purpose was to raise awareness and money to clean up the river. He talked about it with such enthusiasm you could tell he was totally committed to this project. He was enlisting the help of fellow musicians and so far he said he had gotten Don McLean to sign on. This project is still going strong today, go to www.clearwater.org and read all about it.
On the PBS special the backdrop on the stage was decorated with an outline in lights of the Clearwater. The celebrities talked about Pete’s socially active life, singing his songs for all the injustices and downtrodden of the world. They also mentioned his many trips and benefit concerts up and down the Hudson Bay in the Clearwater.
Japan has a designation for people called “Living National Treasure”. The goal is to recognize and preserve the art and the level of knowledge and skill of the individual because it is important to the culture. Pete Seeger is an “American National Treasure” for the art of folk singing and the spirit of nonviolent activism in our country. I cherish the memory of that day we met him in the Oleo Strut.
Posted by Michael Yeager at 12:56 PM