In the picture, Elsie was sitting on one side of the living room and Amanda on the other. I had to decide which one to cut out or whether to shift the slide and scan two pictures. Then it struck me. Who cares? Who will ever want to look at these pictures? My sister will enjoy looking at them, maybe once. But for some reason, I could not forever cut out either Elsie or Amanda. After all, they were always part of our extended family gatherings.

﻿
﻿
On Christmas or Thanksgiving the family gathered at my grandparents house in south St. Louis. These were happy occasions. Grandpa Ben(died in 1959) sat at one end of the table and Grandma(not in the picture, either her or grandpa had to be cut) at the other. This picture shows only some of the family, but for me captures the essence of that fleeting time, which I thought was forever.


I’ve seen these old slides so many times over the years, I can’t look at them from an objective viewpoint. Dad would set up the screen and projector in the living room, which seemed like a major deal and we sat mesmerized, looking at ourselves on vacation or at family functions. Dad had humorous comments for almost every slide and some of his comments were “off-color”. Mom would then say in a stern voice “Kenneth” and my sister and I would laugh. I even scanned a picture of a robin on our dead front lawn. Mom made such a big deal about what a crappy (my word not hers, she rarely used any bad language) picture it was, insinuating that it costs a lot of money to get slides developed, so don't waste them.

These are a few of my favorites. For me each one still captures some of the security, freedom and hope of my childhood, which seems to have gotten lost somewhere along the way to adulthood.
﻿﻿﻿﻿

A big snow in Ferguson meant school was cancelled. In the morning, when I  first opened my eyes to the soft, reflected light of snow filling my room, I knew the day ahead had been transformed into an exciting adventure. 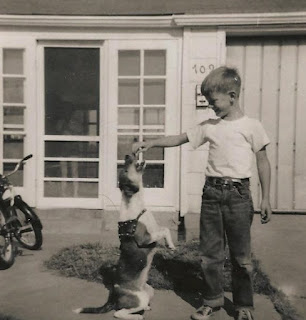 
At Ranch Royale, we camped and rented horses. We were allowed to ride anywhere on the  huge property, unsupervised. 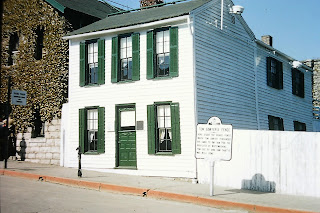 ﻿﻿﻿﻿﻿﻿﻿﻿﻿﻿
When we toured the cave where Becky and Tom had to hide from Indian Joe, the tour guide turned out the lights. It was dark and scary.


My mom had a friend from work named Alma who owned a farm house down in the Ozarks. We went there quite a few times. In the winter I explored the woods with Cookie. I always had my BB gun, but never shot at any animals. I was afraid I might hit one. 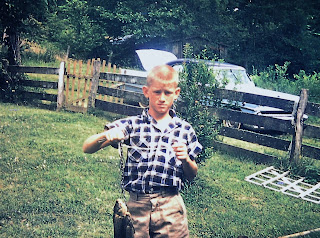 In the summer I fished in the local stream and we swam in a large lake nearby. Alma was sometimes there when we were and she made big breakfasts--pancakes, bacon and fruit. She also cleaned and cooked the fish I caught.


Baseball was a big part of my life growing up. In the St. Louis area we had the Kourey League. One of the highlights of my boyhood was getting to play at Bush stadium in the Kourey League All Star game.

Posted by Michael Yeager at 3:14 PM