The Birth of Folk Rock 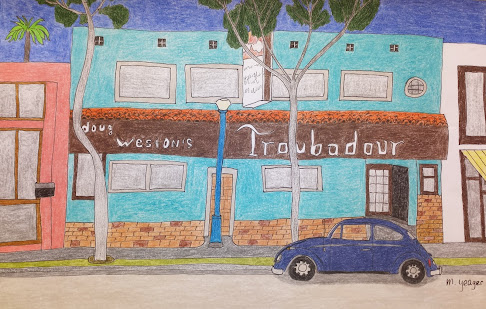 My 17-year-old grandson recently told me he was getting into early 70s music. He sent me his playlist of fifteen songs, which included songs by America, Crosby, Stills & Nash, Joni Mitchell, Paul Simon, the Grateful Dead, and Carole King.  He asked if I could recommend any songs, artists or albums. It was a baby boomer grandfather’s dream question. He had discovered the “Folk/Rock-Singer/Songwriter” era.

Folk/Rock was the background music of the “Hippie” era. Lasting about ten years, from 1965 to 1975, it was formed out of two main musical movements, the Folk Revival music of the late 50s and early 60s, and the British Invasion. In this new evolving genre, song lyrics became more topical and personal. The protest songs of the civil rights movement morphed into anti-Vietnam war songs. Electric guitars of rock & roll joined the acoustic instruments of folk music with a drum backbeat and two or more harmony singers. The musicians dressed in street clothes and didn’t try to be dancers or showmen. Folk/rock was all about the music.

The leading edge of the baby boom generation grew up listening to rock & roll. But in 1959, it almost completely died out. The hard-edged rock & roll of Elvis, Little Richard, Jerry Lee Lewis and Buddy Holly was replaced with cleaned-up pop versions, by the likes of Pat Boone, Fabian, Bobby Rydell, Bobby Vinton Frankie Avalon and many more. In January 1964, when the early boomers were in high school or college, the Beatles released their first US single, “I Want to Hold Your Hand”. In February they appeared on the Ed Sullivan Show and after that, the floodgates opened for the “British Invasion”. The British groups loved American rock & roll and rhythm and blues. They brought the raw energy of early rock & roll back to us, reinterpreted. For the next three years, British rock & roll dominated the American radio airways.

Music historians credit the birth of folk/rock to the Los Angeles group, the Byrds. The group was hailed as the American answer to the British invasion. Roger McGuinn, co-founder of the Byrds, was already an accomplished folk musician by the time he met Gene Clark and David Crosby at the Troubadour in LA and formed the Byrds.

Roger grew up in Chicago. In an interview, he said that when he heard Elvis singing “Heartbreak Hotel” on the radio, he knew what he wanted to do. He got a guitar and practiced diligently. He loved the folk music of the time and in 1957 entered Chicago’s Old Town School of Folk Music. There he learned to play the five-string banjo and continued with the guitar.

As a teenager he played around in the local clubs and his musicianship was so good, that he was asked to be a sideman for the popular folk group, the Limelighters. He was then hired to play behind the Chad Mitchell Trio. You can watch him as a teenager accompanying the Trio on you tube. Bobby Darin wanted to put more folk music into his repertoire and hired Roger to help him. Roger accompanied Darin for a year and a half, until Darin got sick and retired from singing. Darin then hired Roger as a song writer for his TM music in New York’s Brill building. At the same time, Roger also worked as a studio musician and recorded with Judy Collins, Simon & Garfunkel and others.

In 1963, Roger heard the Beatles, who were then popular in England and He began including Beatles’ songs in his solo act and experimented with fusing their rock & roll sound folk songs. He got a call from Doug Weston in LA and was hired to play at his nightclub, the Troubadour. Roger said that his Beatles style folk music was not very popular with the audience. One night Gene Clark was in the audience and loved Roger’s music. Gene asked Roger if he wanted to start a band.

Clark also had a background in folk music. After high school in Kansas City, he formed several folk bands. He was recruited by the New Christy Minstrels and recorded two albums with the popular folk group. After hearing the Beatles, Clark quit the folk scene and moved to LA.

Clark and McGuinn formed a duo and sang Beatles covers and Beatle-esque folk songs as well as some of their own compositions. David Crosby introduced himself to the duo after hearing them perform at the Troubadour and began singing with them, putting on a third part harmony. The trio became “The Jet Set” and through Crosby’s connections hired a manager named Jim Dickson.

They added Michael Clarke to their group as a drummer. According to Wikipedia, Clarke didn’t have much skill playing drums, but he had a haircut like Brian Jones of the Rolling Stones and looked good. Chris Hillman was the last member to be added to the group as a bass player. Hillman had a background in Bluegrass music as a Mandolin player. The group bought instruments just like the ones the Beatles used, including Rogers’ 12 string electric Rickenbacker guitar like the one George Harrison played. This gave the music that electric “jangly sound”. They changed their name to the British sounding “Beefeaters” and put out a single on Elektra records, “Please Let Me Love You”. It’s a pretty bad song in my opinion, but you can hear the Byrds’ signature sound taking shape

Roger wanted to fuse the jangly rock sound with lyrics like Bob Dylan’s. Dickson acquired an acetate disc of the unreleased Dylan song “Mr. Tambourine Man”. Dylan had recorded the demo for his album “Another Side of Bob Dylan”. Ramblin’ Jack Elliot sang harmony on the demo, but sang off key, so the song wasn’t used on the album. At the time, the Byrds were still calling themselves “The Jet Set”. They invited Dylan to hear their version of the song. Dylan loved it and it is conjectured that this influenced Dylan to “go electric”.

With back up harmony and a rock beat, the song launched the Byrds’ career and opened the door for a host of American groups to challenge the popularity of the British groups that dominated the airways.

The Byrds’ “Mr. Tambourine Man” was produced by Terry Melcher (Doris Day’s son), who had also produced songs for the Beach Boys. Terry used the same production style for the song that he used for the Beach Boys’ song “Don’t Worry Baby”. McGuinn wanted his lead vocal to sound like a cross between Dylan and John Lennon. Only three of the Byrds were actually used on the record. Roger sang lead, and David Crosby and Gene Clark sang harmony. Melcher used four members of the “Wrecking Crew” to play the musical instruments, Bill Pitman, Leon Russell, Hal Blaine and Larry Knechtel. They had also played on the Beach Boys’ recording. Chris Hillman and Michael Clark grudgingly did not play on the record.  The Byrds became a regular band at the Troubadour and in a short period of time their musicianship was up to the task of playing on their own recordings. Mr. Tambourine Man was the only song they didn’t actually play on.

In April of 1965 the song shot to number one on the U.S. Billboard Hot 100 and on the U.K.’s Singles Chart. It proved to be the template for a new style of music labeled, folk/rock. In addition to the Byrds, the Lovin’ Spoonful, the Turtles, Sonny and Cher and Barry McGuire all had folk/rock hits that year. The Byrds second number one song of that year, “Turn, Turn, Turn” was written by Pete Seeger. Before Pete recorded it, the Limelighters recorded their version in 1962, when Roger, who went by Jim at the time, was playing guitar with them. By the early 70s, folk/rock had become a dominant genre in American music.

Posted by Michael Yeager at 4:25 PM