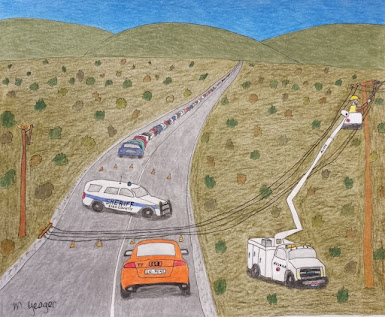 Returning home to Washington from Arizona on highway 93, Katie and I had an experience where an everyday worker came to the rescue, and became the “hero” of our story. We were on our way to Boise, Idaho after spending the night in an RV park in Ely, Nevada. Highway 93 is a long desolate highway. You have to make sure your gas tank is filled before starting out, because there are stretches of over a hundred miles with no gas station in sight. In 2001 I traveled this highway on a motorcycle, and had not calculated my gas correctly. I coasted on empty into a farmer’s driveway and begged him for enough gas to get me to Las Vegas. He was reluctant, but finally sold me some at an inflated price.

This time we had plenty of gas in the RV to cross Great Basin country. Each basin we entered was greater than the last, big open, expansive areas with mountains off in the distance on all sides. There were few cars or trucks on the highway, but about four hours into our trip, I noticed a small brightly colored car approaching in my rear-view mirror. Quickly it grew bigger and bigger and then blew by us, doing well over the speed limit. It was a new, orange, Audi TT. I wished it would have been going slower, not because of any danger factor, but because I wanted to look at the car. It looked really cool.

I had plenty of time to admire the car just a few minutes later. As we came over a rise, the TT was stopped, dead in the road and a Nevada Sheriff’s car was right in front of it, parked sideways, blocking both lanes. We slowed down and stopped behind the TT. The Sheriff must have just gotten there. There seemed to be no reason why he was stopping traffic. We waited, not knowing what was going on for quite a while. Finally, the deputy got out of his car. I sarcastically commented to Katie that he probably had to finish his coffee and donut first.

He was heavy-set and moved like a giant sloth. Opening the trunk of his squad car, he took out a bright lime green work safety vest and put it on. Then he took two stacks of orange cones out and began placing them on the highway around his vehicle. Bubba, as we referred to him, was straight out of casting for a Smokey and the Bandit movie. He never looked over at us, even though we were just one small car away from him.

Cars and trucks began to stack up behind us and on the other side, coming toward us. Still wondering what was going on, we suddenly saw the top of a telephone pole across the road burst into flames. It continued to burn, until the cross piece that held the wires toppled over and fell to the ground next to the pole. The wires it was holding were attached to a pole on our side of the road. So, when the cross piece fell, the wires lay strewn across the highway. If Bubba hadn’t arrived, we would have driven by unknowingly and without consequence. But somebody behind us or in front of us, would have plowed, right into the live wires. I don’t understand how Bubba knew to arrive when he did. He never acted like he was in a hurry or gave any indication of what was going on. The cones he placed around his car, were in the exact right place after the wires fell.

At least now we knew why we were stopped. A couple of fire trucks and another Sheriffs’ car showed up. All of the first responders got out of their vehicles and gathered in groups to talk. Nobody did anything concerning the still burning telephone pole, or the wires lying across the highway.

We waited for over an hour. Long lines of cars and trucks now waited along with us. Then the cavalry arrived or I should say, one utility truck. We watched as it drove along the line of cars and then went off the road and over to the telephone pole on our side of the highway, not the one that was on fire. Only one worker emerged from the vehicle. He put on a harness and pulled out some tools from the truck. Katie and I were elated. We had just driven over 4 hours and had been waiting an hour, while the firemen in full fire-fighting gear chatted with the deputies. The utility worker didn’t chat with anyone. He just methodically did what needed to be done.

We were happy to be waiting in our RV as opposed to a car. We had a place to pee and plenty of snacks and drinks in the frig and cupboards. As we watched the utility worker do his job, I plugged in my I-pod. I had just the right song to play for the occasion, Wichita Lineman.  I had three different versions. The most popular by Glen Campbell, a cover by James Taylor and a version by Jimmy Webb, who wrote the song. I chose Glen’s. What a great song.

We were traveling with our friends Nick and Suzanne. They were in their own RV ahead of us and probably getting close to Boise by now. They are dedicated Birders and have taught us to always have binoculars handy. You never know when an interesting bird might show up. So, I was watching Nevada lineman, through our binoculars. He climbed into his cherry picker and maneuvered it up close to the wires. He put some sort of clip on each wire, I assume to stop the electric flow. I noticed that he was a young handsome guy with jet black hair and beard. I mentioned this to Katie and she grabbed the binoculars and I had a tough time getting them back.

The lineman lowered himself back down, walked across the street, cut the wires and pulled them off the road, one at a time. None of the firemen or deputies helped or even spoke to him. When the last wire was removed, Bubba sauntered back to his car in front of the TT, removed his vest, folded it and placed it in the trunk. He ambled around, picking up each cone, stacked them, and put them back in the trunk. The Nevada lineman was putting his tools away. Just when I was getting ready to play Working Class Hero by John Lennon, Bubba pulled his car to the side of the road and began waving the cars through.

The TT took off like a shot. As we started up, Katie told me to honk the horn to thank the lineman, whose back was toward us. I honked and he turned around and gave us a wave in reply.  He truly was the hero.

It was after dark when we finally pulled into the RV resort in Boise.