When I was in high school in Ferguson, Missouri in the early sixties, I dreamed of traveling to California and living the lifestyle of a surfer.  The southern California mystique was in the minds and hearts of many young people at the time. Rock & roll had nearly died in the early sixties. The hard-edged originality of early rockers, like Elvis, Jerry Lee Lewis, Buddy Holly, Chuck Berry and Little Richard was gone and the airwaves were filled with clean cut white singers; (lots of Bobbys--Vinton, Vee, Rydel) and Fabian, Shelly Fabre, Connie Francis etc. Most sang well, but it was mainly sanitized pop music. Two major styles of music sprung out of the void, Motown and Surf Music.

Surf Rock is a southern California phenomenon integral to the surf culture of the early sixties, originating mainly in Orange County. Dick Dale is credited as the creator and pioneer.  His family moved to Orange County when he was a seventeen-year-old senior in high school. Dick began surfing and wanted to play music that represented his experience. He was influenced by the instrumental rock music of Duane Eddy, Link Wray and The Venturers. He played a Fender Stratocaster electric guitar and worked with Leo Fender to invent an amplifier that could increase the sound and get a reverb effect that emulated the sound of the waves. This reverb, called the “wet sound”, was built into the fenders amps.  He also made use of the vibrato arm of the guitar to bend the notes and he added tremolo picking, rapid picking that became the signature sound of surf bands. 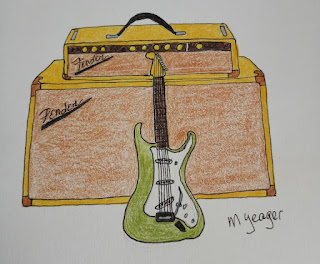 Dick Dale and the Deltones song Let’s Go Trippin’ is thought to be the first Surf Rock song. The group introduced it in 1960 at a dance concert at the Rendezvous Ballroom in Newport Beach on the Balboa peninsula. These concerts became known as “Stomps” because the surfers who attended would stomp on the floor in time with the music causing the old dance hall to shake. The dance, “the surfer’s stomp” was born from this.

The Beach Boys were by far the most popular surf rock band, even though the surfers at the time would not have considered them to be authentic. Surf music was exclusively instrumental until Brian Wilson and The Beach Boys borrowed the basic sound and added the rich harmonies of the late fifties college circuit groups like the Four Freshman and the Hi-Los.  In 1961 the Beach Boys came out with Surfin’, but probably the first surfing song I heard in Missouri was Surfin’ Sufari, followed by Surfin’ USA and Surfer Girl.

Surf music splintered into two genres, instrumental surf rock and vocal surf pop. By 1963 both types of surf music were getting airplay across the country with hits like, Pipeline by the Chantays, Wipeout by the Safaris, and Surf City (co-written by Brian Wilson) by Jan & Dean. Many non-surfing musical groups jumped on the bandwagon and surf music began to fill the airwaves.

During those long, cold winter months in Missouri, intoxicating waves of surf music entered my ears and washed over my brain. I could only dream of the surfing scene of southern California, but it was a dream that enlightened my imagination and warmed my soul.