I was in middle school when early rock & roll all but died out and “girl groups” began appearing over the radio airwaves. These groups sprung out of the male dominated Doo-Wop era of the forties and fifties. The “girl group” phenomenon lasted from about 1957 to 1966.The early groups were mostly teenagers who sang together in school and church. “Mr. Lee”, by the Bobbettes was the first song to make the pop charts. These five teenage girls from East Harlem, originally called themselves the Harlem Queens. They grew up in the projects and like the Doo-Wop groups before them, practiced in the hallways and on the playground.

“Maybe”, by the Chantels, was the next song to become a hit. It was a million seller in 1957 and re-released in 1969 after Janis Joplin covered it. The Chantels were five high school girls, ages 14 to 17, who attended parochial school in the Bronx and sang together in the school choir. 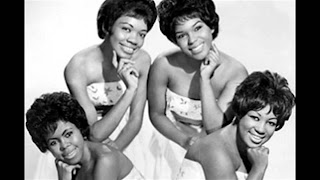 My favorite “girl group”, and the act that solidified the “girl group” sound was the Shirelles, four teenagers from Passaic, New Jersey. They began singing together at high school shows and parties, initially calling themselves the Poquellos. They had a sweetness and innocence to their sound, with back-ground harmonies like the earlier Doo-Wop groups. Their first single “I Met Him on a Sunday” was a song they wrote themselves and sang at school parties. Their second single, “Dedicated to the One I Love”, was a cover of a 1957 “5 Royals” song. The Shirelles version was released in 1959, but without a national distributer, only charted at #83 on the Billboard Top 100. In 1961, after they had several hits, the song was re-released and shot to #3. In 1967, the Mamas and the Papas covered the song "Dedicated to the one I Love" which went to #2. This was the first song that Michelle Phillips sang lead on instead of Cass Elliot.

“Tonight’s the Night”, the Shirelles next hit single, was co-written by lead singer Shirley Owens. “Will You Love MeTomorrow” written by Carole King and her then husband Jerry Goffin was their first #1 song and the first #1 by any “girl group”.  Both of these songs would later make Rolling Stone magazine’s list of the greatest hits of all time. “Mama Said” reached #4 and in early 1962 “Baby It’s You” (co-written by Burt Bacharach, Hal David and Barney Williams) went to #8, It was recorded by the Beatles and put on their first album “Please Please Me” along with another Shirelles’ song, “Boys”, sung by Ringo. In 1969, a group called Smith had the biggest hit with “Baby It’s You”, but I favor the Shirelles’ version. The Shirelles second #1 hit, and their biggest selling single was “Soldier Boy”. Even though they continued to record new material until the late sixties, the Shirelles’ last hit single was “Foolish Little Girl” in 1963, charting at # 4.

Following in the wake of the Shirelles, came a host of other “girl groups” and 1963 was their most successful year. The Chiffons had hits with, “He’s So Fine” and “One Fine Day”(another Carole King/Jerry Goffin song),  The Ronnettes (Phil Spector’s Group) with “Be My Baby”, Martha and The Vandellas (a Motown act) had two hits, “Heatwave” and “Come and Get These Memories”, the Chrystals with “DaDoo Run Run”, and the Angels had a hit with “My Boyfriend’s Back”.

The most popular “girl group” was the Supremes (another Motown act). In 1964 they had two hits, “Where did Our Love Go,” and “Baby Love”. They went on to have 12 number one hits and for a time rivaled the Beatles popularity.

But in 1964, after the Beatles came to America, popular music became dominated by British groups, pushing out and replacing many musical styles, including almost all of the “girl groups”.