John Sebastian and the Lovin' Spoonful 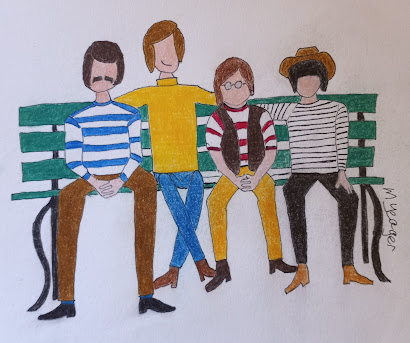 This drawing was inspired by the album art of Chrystal Russell
In the mid-1960s, I bought records by a few musicians as soon as their latest albums were released-The Beatles, The Rolling Stones, Bob Dylan, The Beach Boys, and The Lovin’ Spoonful. Unlike the other groups, The Lovin’ Spoonful’s popularity only lasted about two years, from 1965-67. They were a New York city folk/rock band, a musical genre that dominated the music scene in the late 60s and early 70s. The Byrds are widely credited with the invention of folk/rock, but one could argue that the Lovin’ Spoonful were equally instrumental in launching this new genre. The Byrds’ “Mr. Tambourine Man” (a Bob Dylan song that he gave them the OK to record) is thought to be the first folk/rock hit. It came out in April 1965. The Lovin’ Spoonful’s first hit song was “Do You believe in Magic” which was released in July. Even though the Byrds were from LA and the Lovin’ Spoonful from New York, both bands sprung from the early 60’s folk scene.

John Sebastian grew up in Greenwich Village. His father was a professional concert harmonica player and his mother, a radio script writer. His godmother was Vivian Vance (Ethel Mertz on I Love Lucy), a close friend of John’s mother. His family hosted many musicians at their home, Burl Ives, Woody Guthrie, Lead Belly, Sonny Terry, and Lightening Hopkins. John got to know them and their music intimately. I attended a John Sebastian concert in Tucson in the early 2000s. John said Mississippi John Hurt stayed with his family when he was in New York and John learned Mississippi’s finger picking style. He confessed and demonstrated how the Lovin’ Spoonful song “Loving You” was a direct rip off of Hurt’s musical style.

As part of the folk revival, John was in a group called the Mugwumps along with Zal Yanovsky, Cass Elliot and Denny Doherty. In 1964, they put out one album and two singles. When the group broke up, Cass and Denny joined with John and Michelle Phillips to form the Mammas and Pappas and John and Zal recruited bass player Steve Boone and drummer Joe Butler to form the Loving Spoonful. The Mammas and Pappas 1967 hit song, “Creeque Alley”, tells the story of the formation of the two bands.

After their first hit song, “Do You Believe in Magic”, the Lovin’ Spoonful had a string of hits with “You Didn’t Have to be So Nice”, “Day Dream”, “Did You Ever Have to Make Up Your Mind”, “Summer in The City”, Rain on the Roof”, “Younger Girl” and “Nashville Cats”. They had seven consecutive top ten hits. John Sebastian was the main song writer and lead singer. He often played the auto harp on their recordings and was/is an excellent guitar and harmonica player. Even though the other members of the group were good musicians, John was the dominant force behind the group.

The band was flying high throughout 1966. Joe Butler was in the Broadway production of “Hair”. The group composed and performed the music for Woody Allen’s film “What’s Up Tiger Lily?”. Sebastian composed the music for Francis Ford Coppola’s second film, “You’re a Big Boy Now” with the band performing all the instrumental background. And they scored another hit song from the film, “Darling be Home Soon.” The producers that created the TV show “The Monkeys” built the show around the Lovin’ Spoonful, but "dropped the band from the project due to conflicts over song publishing rights".

In May of 1967 Zal left the group after getting busted for marijuana possession. He was a Canadian citizen and the police pressured him to either give up the name of his drug supplier or be deported. Zal was afraid he wouldn’t be allowed back in to the U.S. so he complied. After this incident, there was a counter-culture movement to boycott all of the Lovin’ Spoonful’s records and performances. In an interview Zal said he left the band because he didn’t like the direction John’s song writing was taking it. Zal was replaced by Jerry Yester from the Modern Folk Quartet, but the band was hurt by the drug controversy and only had a few minor hits after that. In 1968 Sebastian left the group to pursue a solo career. I love his first solo album titled “John B. Sebastian”.

I attended a benefit concert for fire fighters at the Tacoma Dome in the 90’s. The bands included America and the Lovin’ Spoonful. America sounded great, with the two remaining members. The Lovin’ Spoonful consisted of Boone, Butler, Jerry Yester and his brother Jim. Joe Butler sang all of John’s leads. The music sounded the same, but Butler was no substitute for Sebastian on the lead vocals. In 2000, the original band got back together for their induction into the Rock & Roll Hall of Fame.

In the summer of 1969, Sebastian performed at Woodstock and some of it is captured in the “Woodstock” movie. In an interview John said he was not scheduled to perform. He had hitched a ride on a helicopter and attended the festival as a fan and to support his musician friends. He didn’t even bring a guitar with him. After a fairly long bout of rain, the crew needed to sweep down the stage to make it safe for the electronic equipment. They needed someone who could fill in with just an acoustic guitar, so John borrowed a guitar from his friend and fellow folk singer, Tim Hardin, and performed a totally improvised acoustic set. 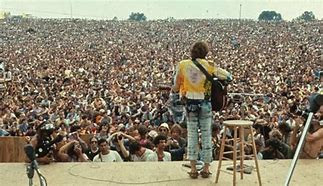 In talking about the performance, he said it was a magical moment for him. He was wearing a self-tie-dyed outfit and pretty high on pot. In the middle of the set, the clouds parted and the sun came out. His solo career got a big boost from that performance. John had his biggest solo hit, “Welcome Back” in 1976, the theme song to the television show “Welcome Back Cotter”.

When we saw him perform in Seattle, John still had his voice and put on a great show in the small club. I was determined to speak to him. During the break he went to the bathroom and I followed him. I didn’t want to be creepy, so I waited outside the door. When he came out, I said, “John, thank you for your music.” He said, “You’re welcome.” And that was the extent of it. He got back on stage and finished the show. When we saw him in Tucson years later, he had all but lost his voice. He still put on a good show, but his croaky voice did not work well singing the old “Spoonful” songs but sounded appropriate for the early folk and blues songs.

The Lovin’ Spoonful was truly an authentic American band that pioneered a genre of rock & roll that is still popular to this day.